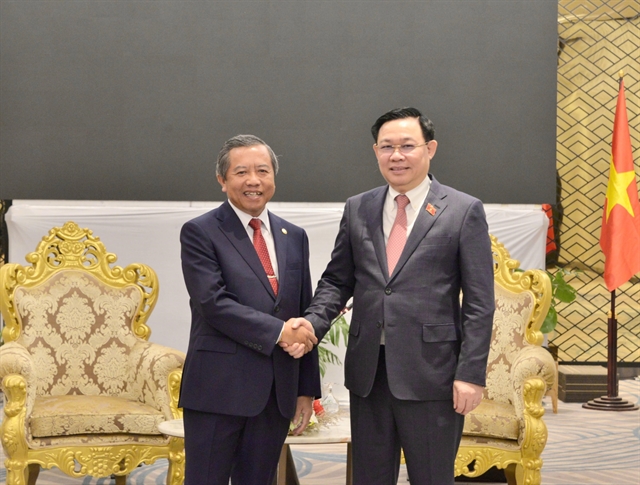 National Assembly Chairman Vương Đình Huệ (right) receives the Lao Minister of Science and Technology, who is also President of the Laos-Vietnam Friendship Association, in Vientiane on Tuesday. — VNA/VNS Photo

VIENTIANE — National Assembly Chairman Vương Đình Huệ commended the Laos-Vietnam Friendship Association for its contributions to the friendship and special solidarity between the two countries during a reception for its President Boviengkham Vongdara in Vientiane on Tuesday.

Huệ described people-to-people diplomacy as an important diplomatic channel between Việt Nam and Laos, in which associations played a significant role.

The top legislator noted that the two sides should further educate their people, especially young generations, about the relations and the need to preserve and promote the rare relationship.

He asked Boviengkham Vongdara, the Lao Minister of Science and Technology, to continue supporting the Vietnamese community in Laos and more than 200 Vietnamese businesses operating in the neighbouring country.

The Vietnamese legislature stands ready to facilitate the development of the Laos-Vietnam Friendship Association and foster the relations between the two countries, he pledged.

For his part, Boviengkham Vongdara briefed the NA Chairman on the operation of his association, saying in the Vietnam-Laos, Laos-Vietnam Solidarity and Friendship Year 2022, it plans to welcome Vietnamese ex-youth volunteers in Laos and organise workshops, seminars and other activities to promote bilateral relations.

He added that the association would also work to enhance economic, trade, and investment ties between the two countries.

Within the framework of the NA Chairman's official visit to Laos, Minister-Chairman of the Government's Committee for Ethnic Minorities Affairs Hau A Lenh paid a courtesy visit to President of the Lao Front for National Construction Sinlavong Khoutphaythoune.

Lenh emphasised the Vietnamese Party's and State's viewpoints of placing importance on ethnic matters and policies in the principles of equality and solidarity towards building the great national unity bloc.

He noted with pleasure developments of the friendship and cooperation between the Vietnamese committee and the Lao front and his wish that the relationship would further grow, benefiting the two countries and peoples.

He spoke highly of the visit to Laos by NA Chairman Huệ and the high-ranking Vietnamese delegation, especially in the Vietnam-Laos Solidarity and Friendship Year. — VNS

People-to-people diplomacy important to Vietnam-Laos relations have 523 words, post on vietnamnews.vn at May 17, 2022. This is cached page on Talk Vietnam. If you want remove this page, please contact us.