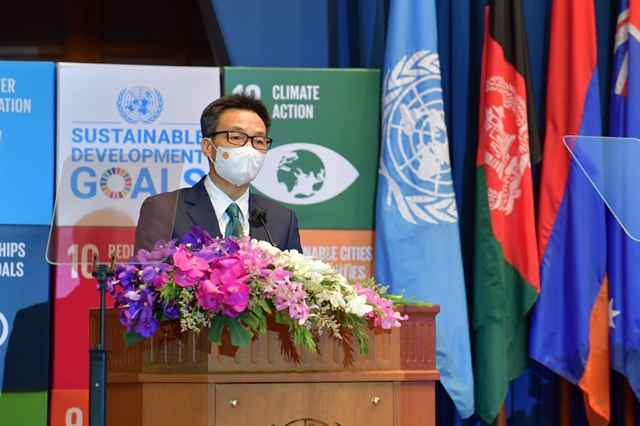 Deputy Prime Minister Vũ Đức Đam speaks at a high-level discussion during the 78th annual meeting of the United Nations Economic and Social Commission for Asia and the Pacific (ESCAP) on Monday in Bangkok, Thailand. VNA/VNS Photos Ngọc Quang

BANGKOK — Deputy Prime Minister Vũ Đức Đam on Monday highlighted a number of focus areas for cooperation between Asia and the Pacific.

He was attending a high-level discussion during the 78th annual meeting of the United Nations Economic and Social Commission for Asia and the Pacific (ESCAP) in Bangkok, Thailand.

The meeting takes place during May 23-25, with 700 senior leaders and representatives of 51 member countries and territories of ESCAP.

The theme of this year's session is "A common agenda to advance sustainable development in Asia and the Pacific".

Speaking at the event, Deputy PM Đam stressed the importance of the meeting as a marker of ESCAP's 75th founding anniversary and highlighted the commission's contribution to the socio-economic development of the region.

He also expressed deep concerns about the effects COVID-19 has left, as well as the challenges brought about by climate change and natural disasters to the economic recovery processes of ESCAP members, which are preventing them from advancing the 2030 Agenda for Sustainable Development.

In that context, the Vietnamese official proposed three cooperation areas that the region should focus on in the near future.

They should place the people at the centre of all development activities, build a social security system that provides jobs and income for all, and make sure everyone has full access to basic services, he said.

They should increase regional connections, especially in transportation, energy, and information and communication technology to ensure supply chains are resilient, and also promote digital transformation to reduce the digital gap between countries.

He expressed his gratitude and hope to continue receiving cooperation and support from the international community, including the United Nations and ESCAP. It will help Việt Nam achieve the development goals and realise the commitments that Prime Minister Phạm Minh Chính made at the 26th Conference of the Parties to the United Nations Framework Convention on Climate Change (COP26), Đam said.

He emphasised that Việt Nam would continue to contribute in a proactive, active and responsible manner to ensure peace, stability, and development of the region and around the world, and make sure it's a sustainable and inclusive development that leaves no one behind. 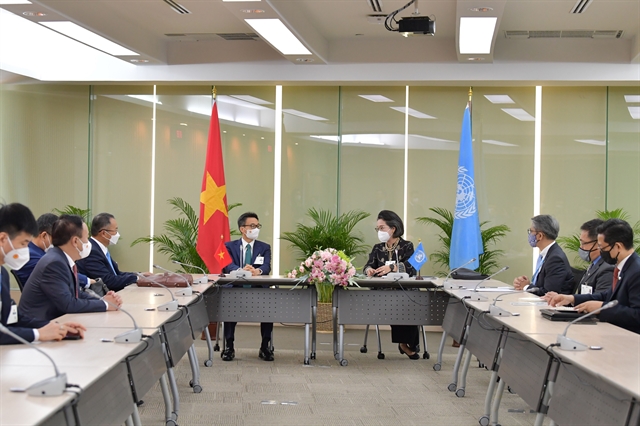 The Deputy PM meets with Armida Salsiah Alisjahbana, United Nations Under-Secretary-General and Executive Secretary of ESCAP, as part of the meeting.

As part of the session, Đam also had a meeting with Armida Salsiah Alisjahbana, United Nations Under-Secretary-General and Executive Secretary of ESCAP, during which he asked ESCAP to increase support to developing countries, Việt Nam included, in actualising the Sustainable Development Goals.

Alisjahbana expressed her appreciation towards Việt Nam’s role and contributions in ESCAP, and confirmed that the commission is more than willing to increase support for Việt Nam's development, especially through training and strengthening data systems.

Established in 1947, ESCAP is one of the five Regional Committees under the Economic and Social Council of the UN, assigned to support socio-economic development in the Asia-Pacific region.

It has 53 full members and nine associate members. VNS

People should be the centre of regional development: Deputy PM have 803 words, post on vietnamnews.vn at May 23, 2022. This is cached page on Talk Vietnam. If you want remove this page, please contact us.