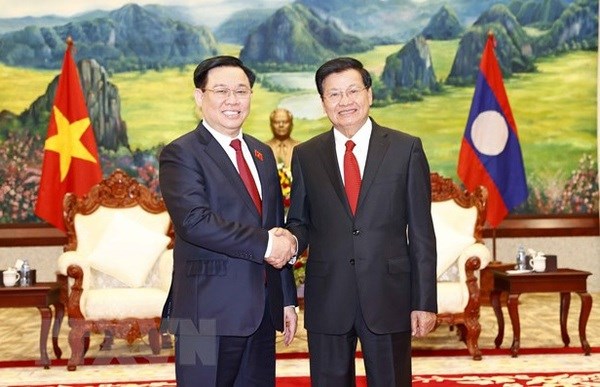 Hanoi (VNA) – The visit by National Assembly (NA) Chairman Vuong Dinh Hue to Laos from May 15-17 was a success, helping further foster the cooperative relations and mutual support between the two parliaments, and bolster the great friendship, special solidarity and comprehensive partnership between the two countries, according to Chairman of the NA Committee for External Relations Vu Hai Ha.

Speaking to Vietnam News Agency following the visit, Ha said that senior leader of Laos highly valued the first visit by Hue as the Vietnamese top legislator during the Vietnam-Laos, Laos-Vietnam Solidarity and Friendship Year 2022, making him the first foreign parliament leader to visit Laos during the ninth tenure of the Lao NA.

Ha underlined that NA Chairman Hue's visit sent out a message that the Vietnamese Party, State, NA and people always have understanding of and sharing with Laos with a spirit of comradeship, brotherhood and mutual support, and Vietnam always stand by the side of, accompanies and assists Laos to overcome all challenges for further development.

Ha noted that during the visit, NA Chairman Hue and the Vietnamese delegation conducted 27 official activities, including talks between the NA leader and his Lao counterpart Saysomphone Phomvihane .

At the talks and meetings, leaders of the two countries had substantial and deep discussions on cooperation between the two parliaments and two countries as well as regional and international issues of shared concern.

Both sides agreed to work closely in effectively implementing the cooperation agreements reached between the two NAs during the visit for the 2022-2026 period, while increasing delegation exchanges between the two NAs and NA agencies and well as parliamentarians' groups and the People's Councils of localities sharing the border and twin relations. 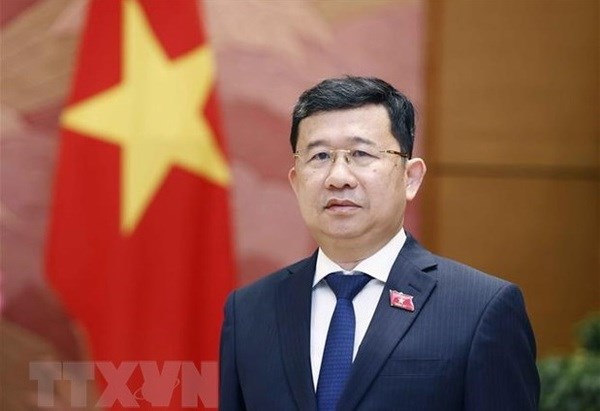 The two sides will continue to coordinate in organising conferences to share experience in parliamentary operation, while cooperating in supervising and promoting the implementation of agreements, treaties and cooperation plans between the two Governments, and working together in organising activities to celebrate the bilateral Solidarity and Friendship Year 2022. They will continue to foster collaboration and mutual support at international and regional inter-parliamentary forums such as the ASEAN Inter-Paliamentary Assembly (AIPA), Inter-Parliamentary Union (IPU), Asia-Europe Parliamentary Partnership Meeting (ASEP), and the Parliamentary Assembly of the Francophonie (APF).

They also consented to coordinate with the National Assembly of Cambodia to continue improving the process and procedures to upgrade the mechanism of cooperation among the legislatures of the three countries to the NA Chairman-chaired level.

NA Chairman Hue also visited Champasak province where he met Secretary of the provincial Party Committee and Governor of Champasak Vilayvong Bouddakham, and laid a wreath at the monument commemorating martyrs of the Laos-Vietnam Combat Alliance. He also visited the Vietnam-Laos rubber company, the provincial boarding school for ethnic minority students, and the Consulate General of Vietnam, and met representatives of the Vietnamese community, Vietnamese businesses investing in four southern provinces of Laos.

Besides the activities of the NA Chairman, delegation members also conducted 10 meetings and bilateral exchanges with the respective agencies and partners of Laos. The exchanges all had substantive and comprehensive contents, demonstrating their determination of urgently implementing high-level agreements in 2022, said Ha.

Regarding the outcomes of the conference co-chaired by the two NAs to share the experience on mechanisms and policies supporting post-pandemic socio-economic recovery and development, Ha said that participants shared their experience in performing the role of a legislature in building laws to promote the national socio-economic recovery and development after the COVID-19 to suit the conditions in each country.

The Lao sides highly valued Vietnam's experience in approving support packages. NA Chairman Hue proposed that the two sides hold another conference in Vietnam to seek measures to boost the recovery process together.

Vietnam is the third largest investor in Laos. The Lao side held that despite a rise of 33 percent year on year in two-way trade in 2021 to 1.2 billion USD, the figure has yet to meet the potential of cooperation between the two countries and accounted for a too small rate in the trade revenue of each country.

Both sides agreed on the need to design breakthrough measures to accelerate bilateral economic, trade and investment cooperation, making it match the sound special political ties between the two countries, as well as the necessity to continue to design effective solutions to ease difficulties facing Vietnam businesses in Laos./.

NA Chairman’s visit helps bolster partnership with Laos: Official have 991 words, post on en.vietnamplus.vn at May 20, 2022. This is cached page on Talk Vietnam. If you want remove this page, please contact us.