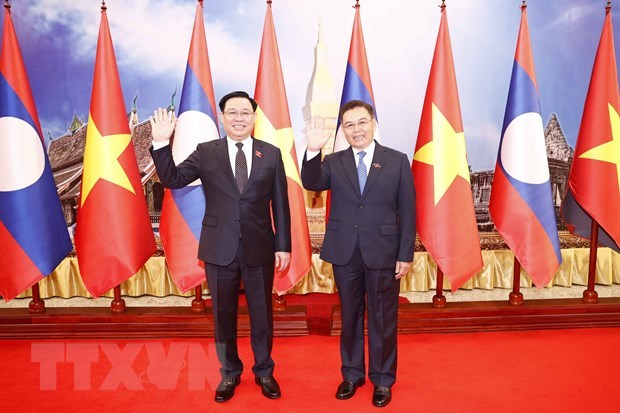 Hanoi (VNA) – National Assembly (NA) Chairman Vuong Dinh Hue and the NA delegation arrived in Hanoi late May 17, concluding an official visit to Laos at the invitation of Lao NA Chairman Saysomphone Phomvihane from May 15.

In a thank-you letter to the Lao NA Chairman, Hue thanked the Lao legislative leader and other leaders for the warm welcome and the sincere, straightforward and trustful discussions during his visit, which he said contribute to promoting the further development of the great friendship, special solidarity and comprehensive cooperation between the two countries in general and the two legislative bodies in particular.

Earlier before leaving Laos , NA Chairman Hue and the high-ranking NA delegation called at the Vietnam Consulate General in Pakse, Champasak province, and met with representatives from the Vietnamese community in four southern Lao provinces (Champasak, Attapeu, Sekong and Salavan).

Noting the large number of Vietnamese in Laos, at around 100,000, including 15,000 in the four southern Lao provinces, Hue asked the general consulate and associations of Vietnamese to assess the need for and effectiveness of schools for Vietnamese children in the localities, in order to find the most suitable model of such schools for the local community.

He also reminded the consulate general and associations to pay attention to preserving the mother tongue and traditional culture in the Vietnamese community.

The NA chairman also said the consulate general should pay more attention to helping Vietnamese businesses cope with difficulties in their operation in Laos, and organize activities in response to the Vietnam-Laos, Laos-Vietnam Solidarity and Friendship Year 2022.

On the occasion, the NA chairman presented school equipment worth 2.5 billion VND (over 108,000 USD) to four friendship schools in the four southern Lao province.

The Truong Hai Group, the Vietnam Bank for Investment and Development and the Viettel Group presented each friendship schools with 100,000 USD, each association of Vietnamese in the four southern Lao provinces with 25,000 USD and the ethnic boarding school of Champasak 50,000 USD.

NA Chairman Hue and the NA delegation also offered incense and flower at the monument to Lao and Vietnamese fallen soldiers./.

NA Chairman Vuong Dinh Hue concludes official visit to Laos have 449 words, post on en.vietnamplus.vn at May 18, 2022. This is cached page on Talk Vietnam. If you want remove this page, please contact us.