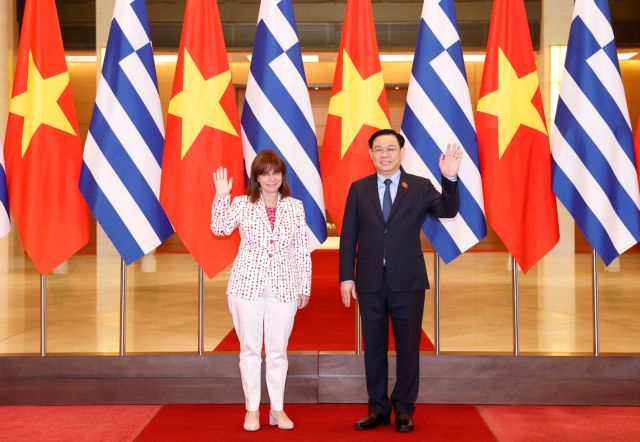 The top Greek leader is on her first official visit to Việt Nam.

The legislator congratulated Sakellaropoulou as the first female President of Greece, a country with an important position in Europe.

Chairman Huệ said he believed that the president’s visit to Việt Nam is an important step, helping to further promote the traditional friendship and multifaceted cooperation between the two countries.

He expressed delight that the friendship and multifaceted cooperation between the two countries has been continuously strengthened and developed, which is demonstrated by exchanges of delegations at all levels.

The cooperation in trade and economy has developed positively, particularly since the Europe-Việt Nam Free Trade Agreement (EVFTA) was implemented.

Chairman Huệ proposed the two countries continue promoting cooperation in areas that are strengths of Greece and Việt Nam has demand for, such as sea economy, shipbuilding, seaports and tourism.

He also suggested the two sides soon sign an agreement on double taxation avoidance and an agreement on sea transportation to create conditions for trade and commercial exchanges.

Chairman Huệ said he hoped that Greece will soon approve the EU-Việt Nam Investment Protection Agreement (EVIPA) and the removal of yellow card for Vietnamese seafood. The two sides should closely cooperate and make use of the advantages of the EVFTA and the EVIPA, particularly in protecting the legitimate interests of businesses of the two countries in investment and trade activities in each other’s market during the post-pandemic period, he said.

The NA leader thanked the President and the Greek Government for continuing to create favourable conditions for Vietnamese nationals to live, study and work in Greece.

He proposed the two sides promote the establishment of relations between localities of the two countries, helping to enhance people-to-people exchanges.

Agreeing with Chairman Huệ’s opinion, she said, on the basis of the EVFTA, the two countries need to base on the potential of each country to increase trade revenue.

She said this visit was aimed at promoting bilateral cooperation and said she believed that after the agreements on sea transportation and double tax avoidance are signed, the trade and economic relations between the two countries will be elevated.

The Greek President said Greece has experience in protecting heritages from climate change, education and tourism.

She said the Vietnamese community in Greece and the Greek community in Việt Nam will contribute to tighten the cooperation between the two countries.

Chairman Huệ thanked and wished Greece continue supporting the stance of ASEAN and Việt Nam on the East Sea on the basis of respect for international laws as well as support other mechanisms with the centre role of ASEAN. — VNS

NA Chairman Huệ welcomes Greek President have 753 words, post on vietnamnews.vn at May 18, 2022. This is cached page on Talk Vietnam. If you want remove this page, please contact us.