VIENTIANNE — National Assembly Chairman Vương Đình Huệ and his Lao counterpart Saysomphone Phomvihane have attended the groundbreaking ceremony of the Laos-Việt Nam friendship park in Vientiane, as part of his official visit to the neighbouring country.

The May 15 event took place on the occasion of the 60th anniversary of the bilateral diplomatic ties (September 5, 1962) and 45 years of the signing of the Laos – Việt Nam Treaty of Amity and Cooperation (July 18, 1977).

The Vietnamese Ministry of Culture, Sports and Tourism and the Office of the Lao People's Revolutionary Party (LPRP) Central Committee are the main investors of the project.

The park is located at Dong Mak Khai which is planned to be turned into a large urban centre of Vientiane capital city.

“It is a symbol of the special solidarity and close-knit ties between Vietnamese and Lao Parties, States and peoples,” said Vietnamese Ambassador Nguyễn Bá Hùng at the ceremony.

Once operational, the park would serve as an education venue, helping young generations of Việt Nam and Laos as well as international friends understand more about the good, pure relationship, he said, noting that the project also demonstrated viewpoints and guidelines of the two Parties and States on maintaining, consolidating and enhancing the special relationship now and in the future. 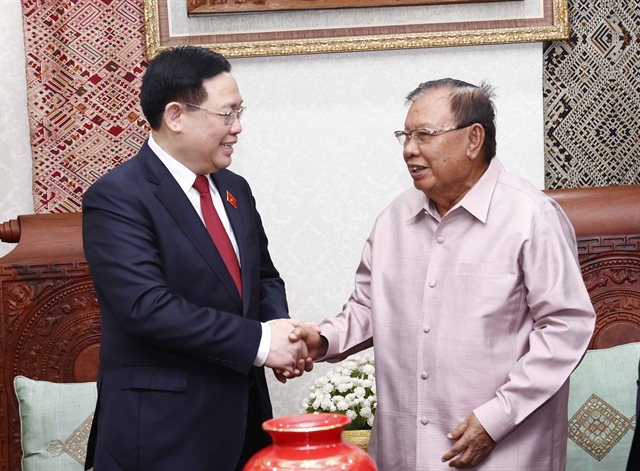 Huệ briefed Bounnhang Vorachith on activities within his visit, including his talks with Chairman of the Lao National Assembly Xaysomphone Phomvihane during which the two sides reached consensus on orientations and measures to deepen the great friendship, special solidarity and comprehensive relations in a substantive and effective manner.

The top legislators were scheduled to co-chair a workshop where the two sides would exchange experiences on mechanisms and policies for post-pandemic economic recovery, Huệ said.

Bounnhang Vorachith, for his part, described Huệ's visit as a milestone for the two Parties and States in the context of the 60th anniversary of the bilateral diplomatic ties and 45 years of the signing of the Laos – Việt Nam Treaty of Amity and Cooperation.

This was also the first official visit to Laos by a Vietnamese senior leader in the two countries' Friendship Year 2022, he noted, adding that it demonstrated the Vietnamese Party and State's consistent policy of attaching importance to the relationship.

Bounnhang Vorachith suggested that apart from the thriving political ties, the two sides should promote their economic and social cooperation, saying economic collaboration played an important role given adverse impacts of the COVID-19 pandemic on the two countries.

In this regard, Huệ said Vietnamese and Lao Parties and States were resolved to create breakthroughs in the economic, trade and investment ties, making them on par with the political relations.

The Vietnamese legislature and its agencies were working hard to promote the links, he told the Lao former leader. — VNS

NA Chairman attends groundbreaking ceremony of Laos-Việt Nam park have 757 words, post on vietnamnews.vn at May 17, 2022. This is cached page on Talk Vietnam. If you want remove this page, please contact us.