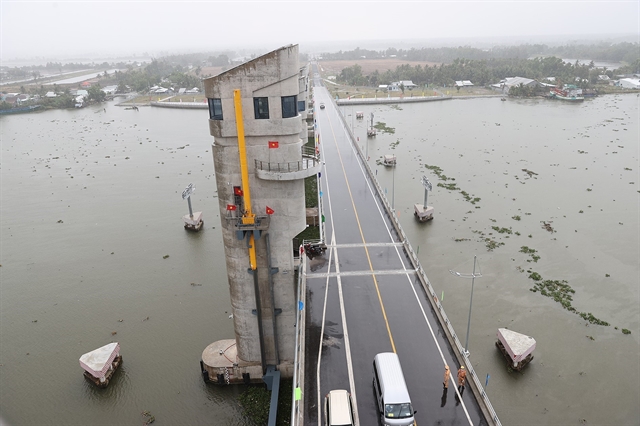 With the onset of the rainy season in the delta, the country's largest rice, fruit and seafood producer, the saltwater intrusion has been declined significantly, local reports say.

The delta normally faces saltwater intrusion in the dry season which lasts from December to April, severely impacting agricultural production and the lives of locals.

Farmer Hai Huệ has a 5,000sq.m durian orchard in Cai Lậy District's Tam Bình Commune, Tiền Giang Province. Under the instructions of local authorities, she dredged ponds in the orchard to store more irrigation water in the last dry season. She also cut grasses and used them to cover the roots of durian trees to retain soil humidity, she said.

"Thanks to these measures, the orchard still bore fruits that could be sold at a good price."

Đặng Văn Lâm, secretary of the Tam Bình Commune Party Committee, said local authorities and farmers proactively carried out suitable measures to cope with saltwater intrusion and drought at the beginning of the 2021-22 dry season, so almost no durian orchard was damaged.

Durian orchards which were partly damaged by saltwater intrusion in the 2019-20 dry season have also recovered and borne fruits again, he added.

In the 2019-20 dry season, which witnessed severe saltwater intrusion, about 40 per cent of durian areas in Cai Lậy District either died or were partly damaged.

To avoid similar damage in the 2021-22 winter-spring crop, local authorities in the delta also set up suitable cultivation schedules for each locality to help farmers avoid a shortage of irrigation water at the end of the crop.

Trịnh Phước Trung, deputy chairman of the Tân Trụ People's Committee, said the building of saltwater prevention sluices in the district has helped prevent salinity intrusion in rice fields and the Nhựt Tảo irrigation system provided sufficient water for the 5,000ha of rice in the district.

The delta planted 1.5 million hectares for the 2021-22 winter-spring rice crop and harvested 7.1 tonnes per hectare, up slightly against the 2020-21 season.

Farmers also refrained from cultivating the third rice crop in drought-prone areas in the last dry season, switching to drought resistant crops to avoid the shortage of irrigation water.

In recent years, the delta, which comprises 12 provinces and Cần Thơ City, has speeded up work on several large irrigation projects to cope with saltwater intrusion and drought.

The Cái Lớn – Cái Bé irrigation project in Kiên Giang Province, for instance, the largest of its kind in the delta, became operational during the last dry season.

In previous years, Kiên Giang had lost more than VNĐ100 billion (US$4.4 million) a year to natural disasters, saltwater intrusion and drought. — VNS

Mekong Delta mitigates saltwater intrusion damages have 778 words, post on vietnamnews.vn at May 14, 2022. This is cached page on Talk Vietnam. If you want remove this page, please contact us.