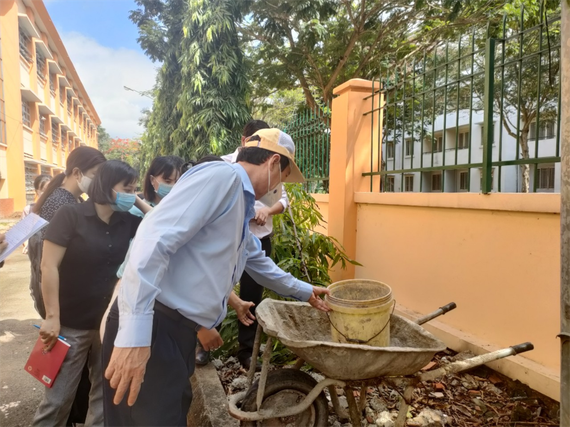 Leaders of the HCMC Department of Health inspect dengue fever prevention and control works in Binh Chanh District.
In the 20th week, one dengue death has been reported, raising the total number of deaths to seven from the beginning of the year to the present.
In the first four months, HCMC recorded 8,481 dengue case s, up 28 percent compared to the same period last year. In the 20th week from May 13-19, the number of dengue patients was 943, presenting an increase of 20 percent (equivalent to 156 patients) compared to the previous four weeks.
Dengue cases in districts of 1, 3, 4, 5, 8, 10, 11 and Phu Nhuan have declined but other areas, including Tan Thoi Hiep and Thanh Xuan wards in District 12, Phu Thanh and Son Ky wards in Tan Phu District and Hoc Mon District's Xuan Thoi Thuong Commune saw a rise in the number of people get infected with dengue.
The southern economic hub documented 2,562 hand-foot-mouth disease patients in the first four months of this year, 96 percent of whom were children aged one to five.
From May 13-19, the city logged 882 cases showing a twofold increase compared to the average of the preceding four weeks.
The surge in cases has been seen in the districts of Binh Tan, Tan Phu, Go Vap and Thu Duc City.
According to the HCDC, HCMC has carried out a campaign in response to the 12th ASEAN Dengue Day starting on May 15 to encourage public and private sectors to join, raise awareness on and take ownership of the fight against dengue.
The program called on each individual to take measures to prevent dengue fever, such as cleaning water containers, renewing water in bottles, vases and tanks, and tidying up the house.

HCMC witnesses continuous jump in cases of HFMD, dengue fever have 510 words, post on m.sggpnews.org.vn at May 24, 2022. This is cached page on Talk Vietnam. If you want remove this page, please contact us.