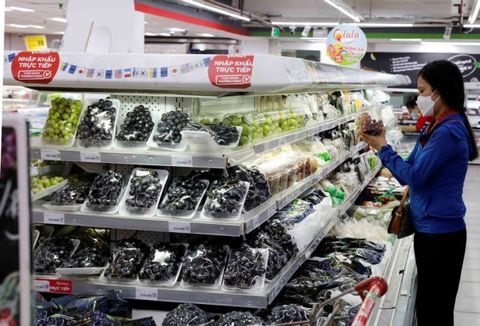 Domestic purchasing power has rebounded after a strong decline caused by the COVID-19 pandemic. That rebound has facilitated businesses to step up production and seize new opportunities, experts have said.

The nation’s total revenue from retail trade and services surpassed VND1.77 quadrillion (US$76.2 billion) in the first four months of 2022, up 6.5 per cent year-on-year, the latest report from the Ministry of Industry and Trade (MoIT) showed.

In April alone, the revenue also saw a positive yearly rise of 12 per cent to over VND455 trillion, according to the report.

These encouraging figures were attributable to abundant good supply and increasing purchasing power in the domestic market, the MoIT said, adding that goods retail sales saw a year-on-year hike of 7.6 per cent to over VND1.42 quadrillion in the four months. Of this, sales of food and foodstuff rose 13.2 per cent year-on-year and that of cultural and educational products increased 11.5 per cent.

In the four-month period, restaurant and accommodation revenues totalled nearly VND171 trillion, up 5.2 per cent, while tourism revenue stood at over VND4.3 trillion, up 10.5 per cent year-on-year as tourism activities gradually returned after the Government agreed to reopen inbound and outbound international flights from March 15.

During April 30 and May 1, many travel businesses experienced a sudden increase in the number of tourists, such as Saigontourist, which served between 30,000 and 50,000 visitors; Vietravel and Vietnam Travelmart which welcomed 4,000 visitors each. The number of customers booking tours with Fiditour increased 30-40 per cent over the same period last year, news site vnbusiness.vn reported.

Statistics from the Viet Nam Administration of Tourism said the tourism sector served nearly five million domestic visitors between April 30 and May 1, earning a revenue of about VND22 trillion.

According to analysts, the domestic market has been gradually recovering, regaining its growth momentum. However, these signals are just the start of a recovery road ahead.

Nguyen Dinh Cung, former director of the Central Institute for Economic Management, told vnbusiness.vn that during the COVID-19 pandemic, many consumers had to tighten their spending, leading to a sharp drop in consumption power. Until now, the pandemic had been gradually controlled, but the trend of tightening spending could be maintained because many people’s jobs and income sources were still precarious.

According to Cung, people who could afford to travel were those with stable incomes and money to spare. But those who were workers and freelancers failed to have sufficient money to speed up their spending.

Thus, it was necessary for the State to draw up policies to support the stability of the labour market and stimulate purchasing power through tax reduction, Cung said.

Thao, who runs a grocery store Ha Noi’s Bac Tu Liem District, said he was concerned about the price of many essential consumer goods gradually increasing as he imported these items for his shop.

Whenever customers wondered, Thao had to explain to them that the prices of many essential goods, from yoghurt and cheese to cooking oil and soap, had increased.

Despite an encouraging increase in retail sales of food and foodstuffs, other products like garments and appliances, tools and household equipment decreased by 3.5 per cent and 4.6 per cent, respectively in the four-month period as the prolonged pandemic affected the income of many households, the MoIT said in its report.

Sharing with vnbusiness.vn, Pham Van Viet, general director of Viet Thang Jean Co (VitaJean), said that the market grew about 10 per cent in the period. However, this growth is still lower than the 15-20 per cent recorded in the pre-pandemic period.

Thus, VitaJean only launched a new product collection with a size equal to one-third of the collections before 2020. The debut of the new collection was based on the calculation of consumption and inventory, Viet said.

In spite of the firm’s experience in conquering strict markets such as the EU and the US, they still encountered difficulties in bringing garment products to the Vietnamese people.

Amid the pandemic, many foreign fashion brands such as H&M and Zara were constantly expanding their distribution systems thanks to their strong financial capacities.

Meanwhile, Vietnamese garment enterprises found it difficult to seize untapped opportunities for garment and textile products in the local market due to disadvantages in raw materials and harsh competition from fake and poor quality products rampant in the market, Viet said, adding that some Vietnamese consumers still had a bias in favour of foreign brands. That is why VitaJean’s domestic sales only accounted for a few per cent of its total revenue.

To deal with the issue, To Hoai Nam, deputy chairman and general secretary of the Viet Nam Association of Small and Medium Enterprises, emphasised the importance of promoting “Vietnamese people give priority to using Vietnamese goods” campaign to continue to inspire customers’ patriotism and national pride.

Businesses and all classes of people should continue to respond to the campaign, thereby creating purchasing power for Vietnamese goods, Nam said. — VNS

Four-month purchasing power rebound facilitates business recovery have 1006 words, post on bizhub.vn at May 17, 2022. This is cached page on Talk Vietnam. If you want remove this page, please contact us.