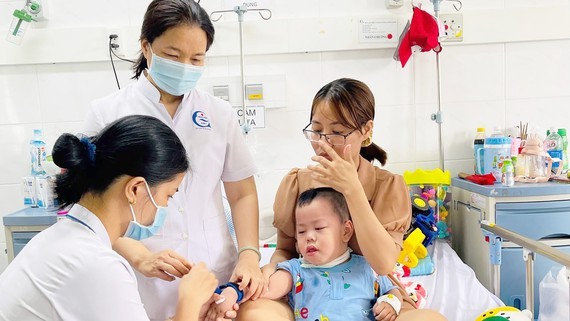 Doctor Nguyen Thi Tuong Diem is examining a child (Photo: SGGP)
On the morning of May 12, at the Ho Chi Minh City-based Children’s Hospital 1 and the Children’s Hospital 2, hundreds of parents brought their children to be examined. Ms. Ho Hai from Ben Cat City in the Southern Province of Binh Duong said that her child had a fever, vomiting, and jaundice; because she has read the information about the recommendations of the Ministry of Health on the internet, and fearing that her child would contract acute hepatitis; thus, she quickly took a bus from Binh Duong to take her child to Children’s Hospital 1 for a medical checkup.
Though doctors said that the baby did not have acute hepatitis, she insisted on a liver enzyme test for her baby as many cases reported gastrointestinal symptoms including abdominal pain, diarrhea and vomiting preceding presentation with severe acute hepatitis, and increased levels of liver enzymes
On the same day, at the Pediatrics Department at many other hospitals in Ho Chi Minh City, many parents had the same thought as Ms. Ho Hai. For instance, at the General Hospital in District 7, Ms. Le Thu Trang from Nha Be outlying district said that she has three children, the oldest is 10 years old, and the youngest is 2 years old. The night before, her 5-year-old son had a fever, stopped eating and had diarrhea. Though she took him to the clinic near the house for examination, the boy's condition has not improved. She was warned by his relatives about acute hepatitis, which can be fatal if not detected early. She was very confused.
According to Doctor Nguyen Thi Tuong Diem, Head of the hospital's Pediatrics Department in District 7, over the past month, the department has received an average of 20-100 visits from pediatric patients with many different symptoms, most parents' questions were centered on whether their child has acute hepatitis. Currently, the department has not found any children with this disease.
Dr. Du Tan Qui, Head of the Infection Department of the Children’s Hospital 1 also said that nearly 1,500 children have been examined and treated at the Infection Department from the beginning of April until now, and no children have been detected to have acute hepatitis with unclear origin.
In order to proactively detect children who may be infected early and follow the health sector's guidelines, the hospital has connected with the Pasteur Institute in Ho Chi Minh City when detecting a case of suspected acute hepatitis in a child, the unit will immediately consult with the hospital to collect information and specimens, conducting PCR testing and metagenomics techniques to find pathogens such as the Adenovirus (a viral disease that is acute and often infects the respiratory tract) and other agents (if any).
According to Dr. Truong Huu Khanh, Vice Chairman of the Ho Chi Minh City Infectious Diseases Association, the most suspected acute hepatitis disease so far has focused on the adenovirus type 41, which usually occurs in children from one month old to 16 years old. The Adenovirus only causes disease in a group of children with special backgrounds, with metabolic diseases, or with pre-existing hepatitis B, the attack of Adenovirus will cause more serious liver damage. Children are required to be treated in the hospital like other acute viral hepatitis cases, to help the liver recover gradually.
Dr. Khanh added that the adenovirus does not cause illness in all children, so it cannot break out into an epidemic like Covid-19 or hand, foot, and mouth disease. He warned that vomiting and fever symptoms are common manifestations in young children. Therefore, not all children with these symptoms are classified as suspected of having acute hepatitis. Only when children have symptoms of yellow eyes, yellow skin, and dark urine, parents should think about the risk of hepatitis and have to take the child to the doctor and do tests to determine the cause and give appropriate treatment.
Associate Professor Phung Nguyen The Nguyen, Head of the Department of Pediatrics under the University of Medicine and Pharmacy in Ho Chi Minh City, also recommended that parents should keep calm but pay attention to early symptoms related to the liver disease in children and do not abuse liver enzyme tests for children without a doctor’s prescription. The most common lesions caused by the Adenovirus include respiratory tract infection, eye conjunctivitis (pink eye), cystitis, meningitis…
However, the cause of acute hepatitis is caused by adenovirus or not is still hypothetical. Therefore, while waiting for research results to confirm the cause of the disease, parents should pay attention to the principles of personal hygiene that can be a source of disease transmission for children, such as not sharing personal belongings, cooking food and drink with boiling water, ensure a clean water source and treat the patient’s waste well, because that can be a route of transmission.
In addition, schools and parents need to pay attention to the prevention of diseases for children at schools by ensuring hygiene and not allowing children to share items. Above all, children must frequently wash their hands with soap and be fully vaccinated against hepatitis A and B.

Experts warn not to abuse liver enzyme tests to detect acute hepatitis have 1161 words, post on www.sggpnews.org.vn at May 14, 2022. This is cached page on Talk Vietnam. If you want remove this page, please contact us.