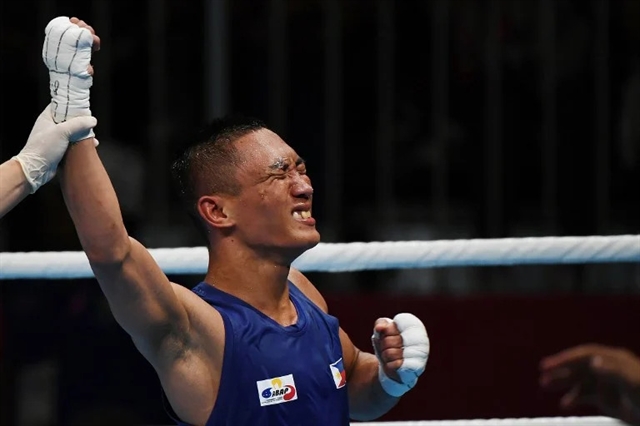 Rogen Ladon of the Philippines wins men’s 52kg title on May 22. AFP/VNA Photo

Thailand won four golds while the Philippines and Việt Nam secured three titles each on the last day of the SEA Games 31 competition on May 22.

The first victory of the Thais went to Somchay Wongsuwan in the men’s 57kg as he beat Farrand Papendang of Indonesia 5-0.

Bunjong Sinsiri followed his compatriot on the top podium after defeating Sarohatua Lumbantobing of Indonesia 5-0 in the men’s 69kg category.

Ladon was the aggressor from the get-go en route to a 3-2 split decision victory.

The 28-year-old Ladon found an opening early and kept connecting his combinations to put Thảo on his heels.

Ladon, a Rio Olympian, is the first of four Filipino boxers competing for the gold.

Bautista dominated Naing Latt of Myanmar with a 5-0 unanimous decision win in the men’s 57kg class.

Bautista was determined to claim the gold after settling for the bantamweight bronze in the 2019 SEA Games in Manila.

Another win for the Pinoys went to Eumir Marcial, who was given a win over Delio Anzaqeci Mouzinho of Timor Leste with the referee stopping the contest in the men’s 75kg.

Trần Thị Linh of Việt Nam was confident to begin her final against Huswatun Hasanah of Indonesia in the women’s 60kg after she beat Tokyo Games silver medalist Nesthy Petecio Alcayde of the Philippines on May 21.

The giant killer, who also defeated two SEA Games champions in the previous rounds, attacked with heavy punches on Hasanah. But the Indonesian was not an easy rival and gave Linh several hits in the first round in return.

The second round was all Linh’s as she changed her tactics with fast bouts and quick moves that left Hasanah confused in both attack and defence. Linh was announced the winner with a 5-0 win.

Meanwhile, Vương Thị Vỹ added a second gold for Việt Nam in the women’s 57kg after winning 5-0 over Nilawan Techasuep of Thailand.

The boxing team completed their mission with three golds belonging to the female boxers. It was the first time Vietnamese women have grabbed such high results at the SEA Games.

Boxing titles shared among Thailand, the Philippines and VN have 786 words, post on vietnamnews.vn at May 22, 2022. This is cached page on Talk Vietnam. If you want remove this page, please contact us.