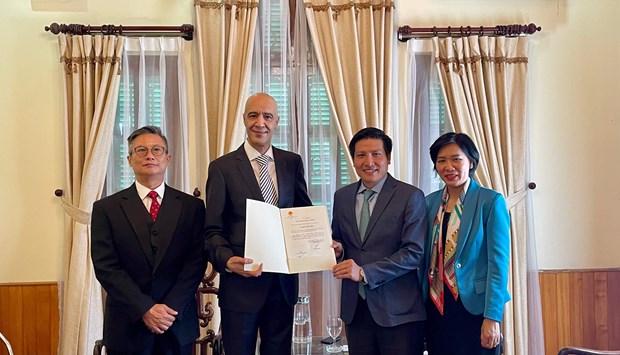 At the ceremony to hand over the honorary consul certificate of Morocco in Ho Chi Minh City to Doan Huu Duc in December 2021. (Photo: Moroccan Embassy in Vietnam)

Hanoi (VNA) – Vietnam is one of the few countries that have successfully fulfilled the dual goals of fighting the COVID-19 pandemic and ensuring the smooth operation of the economy, Moroccan Ambassador to Vietnam Jamale Chouaibi has said.

In an interview granted to the Vietnam News Agency (VNA), the ambassador attributed the results to the early and effective implementation of pandemic prevention and control measures, as well as the awareness-building work in the country.

All partners of Vietnam have applauded the Government's new strategy on safe and flexible adaptation to and effective control of the pandemic to stimulate the national economic recovery and ease pandemic impacts, Chouaibi said.

The ambassador also lauded Vietnam's COVID-19 vaccination rollout thanks to the vaccine diplomacy strategy, noting that the country has received enough vaccines to distribute to all of its cities and provinces within a short period of time.

Regarding the 60th anniversary of the Vietnam-Morocco diplomatic ties in March 2021, he said the celebration offered a chance to honour the friendship between people of the two countries, review their bilateral cooperation, and seek the best solutions to enhance and expand the partnership.

The ambassador noted that in the political sphere, the two countries share a number of basic principles in external relations, especially the respect for sovereignty and territorial integrity, no intervention in each other's internal affairs, the promotion of peace, stability and development, and commitments to addressing disputes via dialogue, conciliation and negotiation.

He also highlighted the expanding bilateral trade ties, saying Vietnam is the second most important partner of Morocco in the Association of Southeast Asian Nations (ASEAN).

Morocco 's appointment of an honorary consul in Ho Chi Minh City on December 7, 2021 has contributed to creating more trade and business opportunities between the two countries. 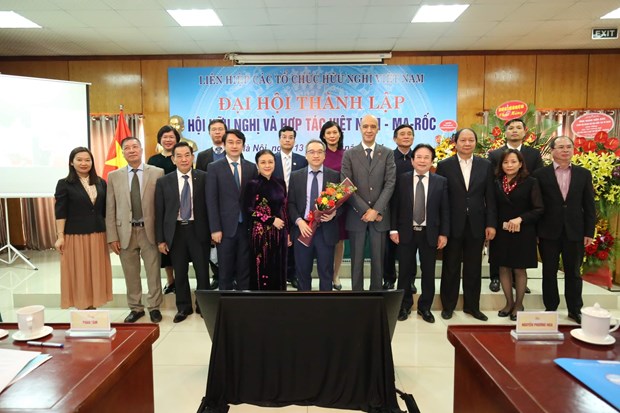 The establishment of the Vietnam-Morocco friendship association last December as a step forward in the promotion of the bilateral cooperation and mutual understanding. (Photo: VNA)

He emphasised the exchange of visits by government and legislative leaders, notably the visit to Morocco by NA Chairwoman Nguyen Thi Kim Ngan in March 2019, and the visit to Vietnam by President of the Moroccan House of Representatives Habib El Malki in December 2017.

The online talks between NA Chairman Vuong Dinh Hue and President of the Moroccan House of Representatives Habib El Malki on July 7, 2021 have demonstrated the two sides' wish to promote the bilateral ties, the ambassador said.

He viewed the establishment of the Vietnam-Morocco friendship association last December as a step forward in the promotion of the bilateral cooperation and mutual understanding.

The diplomat noted that the Vietnam-Morocco cooperation focuses on politics, economy and culture, and both countries have shown their political will to consolidate and expand the partnership, as reflected through the increasing number of agreements and memoranda of understanding.

As the two countries share many similarities, there is good potential to foster bilateral coordination in the time ahead, the ambassador said, pledging that Morocco will help Vietnamese firms to safely access local markets.

Morocco and Vietnam should jointly carry out tripartite or quadrilateral investment projects in African countries, especially in agriculture, with the participation of international donors, he suggested./.

Vietnam successfully fulfills dual goals: Moroccan Ambassador have 710 words, post on en.vietnamplus.vn at January 21, 2022. This is cached page on Talk Vietnam. If you want remove this page, please contact us.