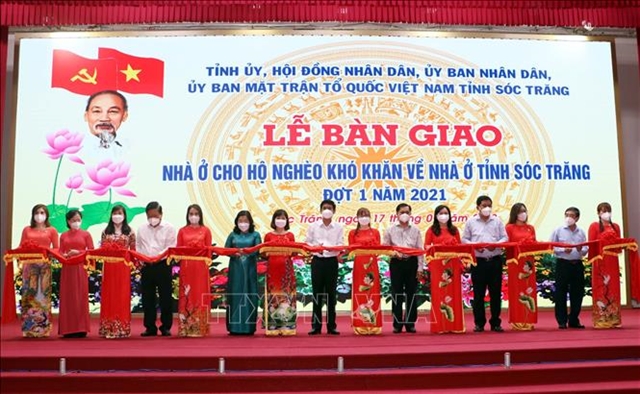 Dương Sà Kha, chairman of the province Fatherland Front Committee, said the , steering committee for mobilising support to build houses for the poor launched a programme last April to raise funds to build houses in 2021- 22 and received more than VNĐ60 billion (US$2.6 million).

The steering committee is building 313 more now, finished 60 – 90 per cent of the work and expects to hand them over before Tết (the Lunar New Year) on February 1.

The People's Committee is soliciting donations to complete the target for the lunar year.

The province has a poverty rate of 6.6 per cent.

It is also carrying out other programmes to ensure poor and near-poor people and others covered by Government support programmes can celebrate Tết with joy.

It plans to give Tết gifts to seniors, children in especially difficult circumstances, poor and near-poor households, and beneficiaries of support policies, and has earmarked VNĐ21.4 billion ($940,000).

The province Fund for the Poor will spend another VNĐ1.6 billion ($70,000) to give gifts to poor and near-poor households.

The province has a large ethnic population, especially Khmer. – VNS

Sóc Trăng Province's poor get free houses have 415 words, post on vietnamnews.vn at January 18, 2022. This is cached page on Talk Vietnam. If you want remove this page, please contact us.