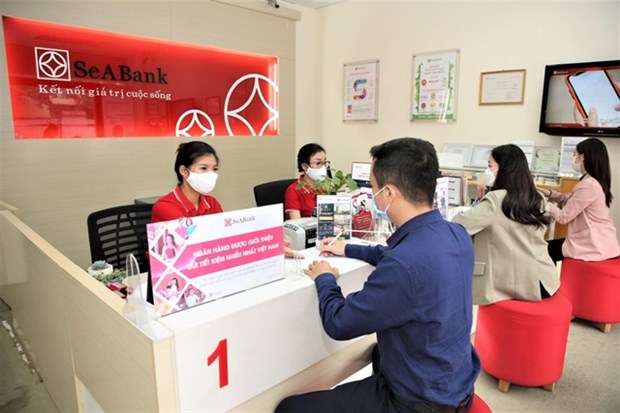 SeABank offers more than 181.3 million shares to its existing shareholders to raise its charter capital to 731 million USD. (Photo: tinnhanhchungkhoan.vn)

Hanoi (VNS/VNA) – Southeast Asia Commercial Joint Stock Bank (SeABank) has received approval for its public offering of over 181.3 million shares to existing shareholders at a price of 15,000 VND (0.66 USD) per share.

The bank is expected to collect 2.72 trillion VND (119.8 million USD) from the issue with a ratio of 12.2633:100 to improve its financial capacity, step up business activities, maintain stable operation and raise charter capital to 16.6 trillion VND (731 million USD).

Shareholders who want to exercise their rights to buy shares must register for the offering no later than January 18, 2022.

The bank officially listed over 1.2 billion shares on the Ho Chi Minh Stock Exchange in March 2021 ( HOSE : SSB). After the listing, the SSB price increased steadily for many consecutive sessions.

SeABank was recognised among 17 influential credit institutions in Vietnam's banking system in 2021. It was assigned a long-term rating of B1, with a positive outlook by Moody's for three consecutive years./.

SeABank to offer over 181.3 million shares to shareholders have 365 words, post on en.vietnamplus.vn at January 15, 2022. This is cached page on Talk Vietnam. If you want remove this page, please contact us.