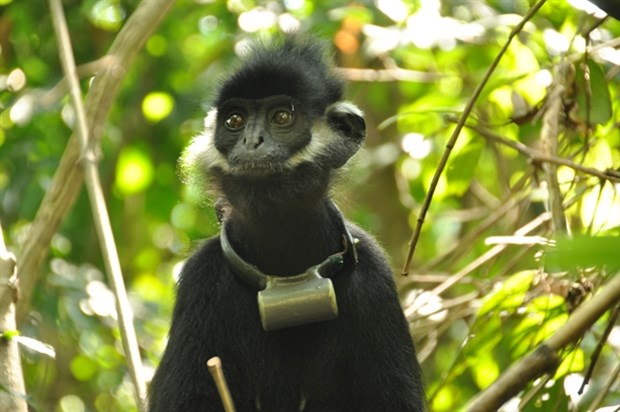 A Hatinh langur, an endangered primates species is released at a forest in central Vietnam. (Photo courtesy of Bui Van Tuan)

Hanoi (VNS/VNA) – About 25 different primate species out of 44 found in Vietnam call the Greater Mekong home, but these unique species are increasingly threatened by habitat loss and fragmentation, climate change , hunting and illegal trade .

The 44 primate species found in the region, 19 of which are endemic, are a testament to the amazing biodiversity of the region, but their conservation status is a stark reminder of the grave threats they face.

Deforestation, habitat degradation and hunting driven by the wildlife trade have forced many primates in the Greater Mekong to the brink of extinction.

One-quarter of the species are classified as Critically Endangered in the IUCN Red List, while about half are categorized as Endangered.

Vietnam is home to five endemic primate species, all of which are included in the list of the world's 25 most Critically Endangered species. Moreover, the latest Red List assessments show an increased extinction risk for a quarter of the primates compared to the previous assessments conducted in 2008, while the rest showed no reduction in their extinction risk.

Primates from this region are not only losing their precious habitat at an alarming rate, but they are also severely threatened by the wildlife trade – both legal and illegal. Their meat is sold as food, parts are traded for use in traditional medicine, and live animals are marketed as exotic pets or props for tourist selfies.

In Vietnam, although all primate species are protected by law or community convention, hunting, illegal captivity and trading are the primary causes for a decrease in primate populations.

The number of primates in the legal wildlife trade – often for use in biomedical research and pharmaceutical testing – has been on the increase, with the legal trade in primates estimated to be worth 138 million USD in 2015.

Furthermore, research has predicted that all apes and Asian and African monkey species are at high risk of contracting SARS-CoV-2, the virus that causes COVID-19 in humans.

Zoonotic diseases – which have their origins in animals and are often caused by the frequent and unsafe contact between wildlife and humans in the trade – can then be transmitted back to animals, further threatening their survival.

Rhesus macaques and long-tailed macaques, both of which occur in the Greater Mekong region, have been infected with the SARS-CoV-2 virus in laboratories and developed COVID-19 symptoms similar to humans.

Fortunately, many organizations, government agencies and local communities are working tirelessly to protect some of these unique species from disappearing. The WWF is carrying out surveys in some protected areas to monitor primate populations, such as the white-handed gibbons in Nam Poui National Protected Area in Laos, or the Ha Tinh langur in Thach Hoa district of Quang Binh province in central Vietnam.

In Vietnam, the WWF supported patrols are removing snares and releasing primates caught in traps back into the wild in the Annamite mountains.

Connecting fragmented forests and improving forest quality has also been a strategy that WWF has carried out in Vietnam to protect species over the past 30 years. Recently, WWF supported the upgrading of Song Thanh from a Nature Reserve to a National Park in Quang Nam province, established two new Saola Nature Reserves in the central Quang Nam and Thua Thien Hue provinces, and assisted government partners to extend protected areas in Quang Nam, Quang Tri and Thua Thien Hue provinces. All of these efforts are to establish safe corridors for species to thrive.

Community awareness-raising activities about wildlife and primates are regularly carried out in communities that live close to the species' habitats, as well as with other key stakeholders at the national level. Besides providing conservation knowledge, WWF's campaigns in Vietnam also encourage public changes in behaviour and engage local communities to protect their primates.

Many other conservation organisations are protecting, researching, rescuing and restoring the unique primates in the region. Fauna and Flora International is working extensively in Vietnam and Myanmar to monitor and protect threatened primates in key locations.

The Endangered Primate Rescue Centre in Cuc Phuong, in the northern Ninh Binh province of Vietnam, is rescuing and working on breeding threatened species to reintroduce them to the wild. The Little Fireface Project is researching lorises in the wild while also working to tackle their trade as pets and props for selfie-tourism.

Organisations like the Jahoo Gibbon Camp in Cambodia and the Gibbon Experience in Laos are creating safe ways for tourists to see and hear primates in the wild, with above local economy and livelihoods and in turn, reduce hunting pressure.

"If the remaining primate populations in the Greater Mekong are to survive and eventually recover to viable numbers, governments, NGOs, corporates and local communities must all work together and implement conservation measures targeted at primates," said Van Thinh Ngoc, CEO of WWF-Vietnam.

"WWF is currently working with other primatologists to review primate conservation efforts in Vietnam; there is hope to save these incredible species that make our region unique, but we must act swiftly and decisively."

The WWF is calling on decision-makers to include interventions needed to address key drivers of zoonotic disease outbreaks in their pandemic prevention plans. Closing forests and high-risk wildlife markets, for example, will help recover wildlife populations and maintain local and global biodiversity that naturally help regulate disease, as well as help ensure sustainable use of natural resources.

To support the fight against COVID-19, citizens are highly recommended not to buy, sell or consume wildlife products./.

Rich primate species in Vietnam threatened: WWF report have 1045 words, post on en.vietnamplus.vn at January 24, 2022. This is cached page on Talk Vietnam. If you want remove this page, please contact us.