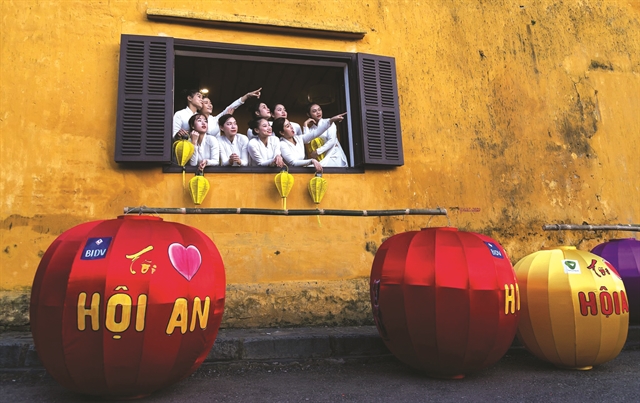 Models pose at an old house in Hội An City. The area has opened tourism services for 2022. Photo courtesy of Mai Thanh Chương

Despite having to deal with a multitude of issues due to the pandemic, both Quảng Nam Province and Đà Nẵng City are setting out on their paths for tourism recovery, with local authorities confident the regions will bounce back stronger than ever.

Having postponed regular programmes several times in 2020-21 due to rising cases of coronavirus, Tân Thành flea market on An Bàng beach, 5km from Hội An ancient town, officially resumed its regular weekend market with a Christmas fair on December 18.

The weekend hosted 3,000 visitors from Đà Nẵng and Huế, ensuring 'safe' regulations in the prevention of COVID-19.

"Reopening tourism will help revive the hospitality industry in Hội An, a key money-maker forming 70 per cent of the revenue of the tourism hub. It's also an ignition for our business community, redecorating service and accommodation for hosting visitors," said Lê Quốc Việt, manager of Santa Villa in Tân Thành fishing village of Hội An.

Tân Thành fishing village on An Bàng beach has been creating a beach tourism community with a flea market, art space and free plastic-zero and waste-recycling beach rendezvous.

He said visa policies should be more open for retirees from Europe and the US to stay longer in Hội An, Đà Nẵng, Nha Trang, Cần Thơ and the Mekong Delta.

Other destinations in Hội An including the Old Quarter, Thanh Hà pottery village and Trà Quế vegetable garden have welcomed visitors from late November 2021.

Ký Ức Hội An (Hội An Memories) – a 60-minute show about the 400-year history and development of Hội An during the Đại Việt (Great Việt) State in 15th-18th century – has resumed regular performances at Gami Theme Park on the sandbank of the Thu Bồn River after several cancelled performances.

"People became aware of fitness and hygiene and environment and living space in the two years of the pandemic. It's a trend that the provincial tourism association says boosts 'green' behaviour including cleaning, waste recycling, organic consumption and healthcare tours," Thanh said.

"At least 44 businesses have committed to recycling waste, reducing plastic use and promoting organic farm produce in serving tourists in recent years."

Phạm Vũ Dũng, an owner of the Rose Travel company, has launched the check-in site Chic Chillax in Cẩm Châu ward as an eco-tour site in Hội An.

Dũng plans to turn the 400-hectare paddy field into a farm destination with low carbon emissions.

"We cooperated with farmers to host farm tours – where tourists enjoy rice growing and organic food from farmers. Farmers still work on farms, but their skills will offer a rural life experience for tourists," Dũng said.

"Straw collected from the harvest will be used for biogas rather than burning in the field. The site will only produce chemical-free rice and organic produce."

In Đà Nẵng, more than 300 hotels and resorts and 50 travel agencies have resumed service, while nine of 16 destinations officially opened for visitors in early January.

Last December, Đà Nẵng held a three-day national medicine conference, the first MICE in recent times, with the participation of 1,000 people in 'safe' and 'healthy' conditions at the beachfront Ayriana International Convention Centre.

In a recent survey by the  Đà Nẵng tourism promotion centre, 57 per cent of tourists said they preferred travelling here as the COVID-19 infections were well controlled, and 75 per cent said they required a 'safety' guarantee from local travel agencies.

She said Đà Nẵng would use golf and MICE as two solutions in reviving tourism this year, creating a strong base for better growth in 2024.

"We are working on an annual marketing plan for golf tourism, starting with the Đà Nẵng FantastiCity Golf Open expected in March of 2022. The tournament will include golf inspections for local tour operators," she said.

"The golf tourism promotion plan of Đà Nẵng will boost tourism and economic recovery, especially towards high-quality and luxury tourism."

Vice Director of Đà Nẵng Tourism Department Nguyễn Xuân Bình agreed: "Golf tourism and high-quality tourism closely linked to sports and health is regarded as a rising trend within the travel industry. Đà Nẵng and authorities in coastal central Việt Nam will promote golf tourism as a major focus in 2022 and the following years."

Bình said the city would host tourism in 2022 in a spirit of "safe and flexible adaptation and effective control of the COVID-19 epidemic".

He said the Việt Nam Golf Tourism Association and Đà Nẵng planned to host the World Golf Awards 2022 to promote the city as a golf destination.

Eric Lynge, director of the sports marketing survey, said over half of Asian respondents were planning a golf break, mostly domestically, due to pandemic travel.

Lynge said value-seekers (who travel for affordable golf packages, cheaper than those at home) and adventurous spenders (who combine golf trips with exploration) are a potential market for Đà Nẵng, an emerging destination with a variety of tourism services at competitive prices.

The central city will host the 16th annual Routes Asia Development Forum 2022 on June 6-8, offering a platform for airlines, airports and tourism authorities to boost relationships.

The Chairman of Đà Nẵng City's tourism association, Cao Trí Dũng, said he hoped tour services linking Đà Nẵng and central Việt Nam with East Asia market would resume in June, while Europe and the US would join later in the year.

Dũng said Quảng Nam would host the National Tourism Year in 2022, and create a chance for Đà Nẵng and Quảng Nam to share tourism services.

He said Đà Nẵng and the central coastal destinations would see tourists from South Korea, China, Thailand, Chinese Taipei and Japan visiting in the summer for golf and MICE events.

Quảng Nam, Đà Nẵng set out on tourism recovery journey have 1295 words, post on vietnamnews.vn at January 23, 2022. This is cached page on Talk Vietnam. If you want remove this page, please contact us.