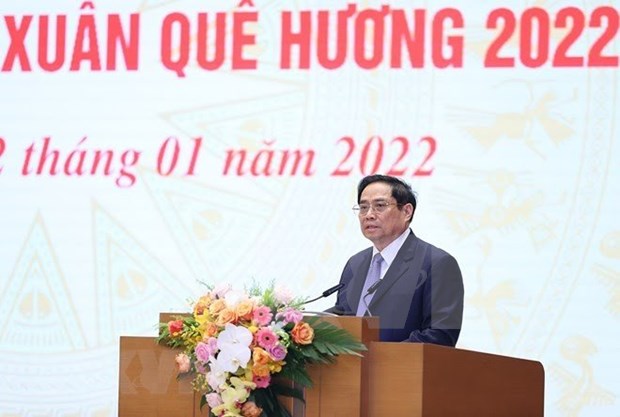 Hanoi (VNA) – Prime Minister Pham Minh Chinh hosted a reception for a delegation of more than 50 Vietnamese intellectuals and entrepreneurs who returned from abroad to attend the "Xuan Que huong" (Homeland Spring) programme 2022.

Members of the delegation expressed delight at the achievements of Vietnam, especially in COVID-19 prevention and control in 2021 and the rising position of the country in the world arena. They voiced their belief in the country's strong development and bright future.

Briefing the Government leader on the situations of oversea Vietnamese (OV) in their respective host countries, the delegates gave a number of proposals to the Party and State as well as ministries and sectors on development orientations in various fields, and expressed hope for more favourable conditions to make more contributions to the homeland.

The Government leader extended New Year wishes to the delegation and the whole Vietnamese community abroad. He said as he himself used to study in a foreign country, he understands how the OVs feel. “The Vietnamese root is always in the heart of all Vietnamese people wherever they are in the world,” he said. 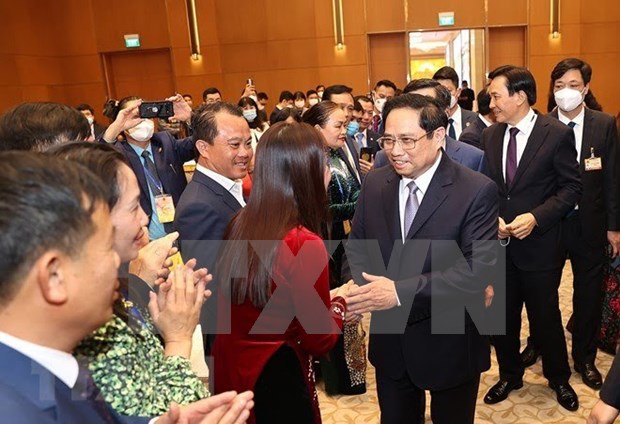 He highlighted a number of achievements that Vietnam made in 2021 despite COVID-19 impacts, including the successful organisation of the 13th National Party Congress and the elections of deputies to the 15th National Assembly and all-level People's Councils, and fruitful outcomes of COVID-19 control activities and socio-economic recovery. Vietnam has so far put the pandemic under control, becoming one of the six countries with highest COVID-19 vaccination coverage in the world, while macroeconomic stability and major balances were ensured, and business and production activities were resumed, he noted.

Last year, Vietnam recorded a GDP growth of 2.58 percent, with total export revenue surging 22.6 percent to 668.5 billion USD and trade surplus of 4 billion USD, he said, adding that foreign direct investment in the country increased 9.2 percent. Social welfare was ensured, while the international integration was strengthened, and the country's international stature was enhanced, he said. In the past two year, Vietnam operated many flights to repatriate more than 200,000 Vietnamese citizens home.

The PM affirmed that the 5.3 million Vietnamese people abroad have made great contributions to these successes. The community also donated more than 80 billion VND and medical supplies as well as brainpower to the homeland, while directly engaging in the pandemic fight at home.

Holding that 2022 is an important year in the implementation of the targets for the 2021-2025 period, with many forecast difficulties and challenges, the PM stressed the need for synergy and the great national solidarity of Vietnamese people at home and abroad. The Government will work hard to make the way home shorter for all OVs, he stated.

Along with rolling out measures to support the community to enhance their legal status in the host country and settle down, the Government will continue to improve the efficiency of citizen protection work and the management of guest workers and students, and expand the teaching of Vietnamese language among the community, he said. He added that Vietnam will continue to complete policies to create more favourable conditions for OVs to contribute their brainpower to the homeland's development./.

PM meets OVs joining “Xuan Que huong” programme have 819 words, post on en.vietnamplus.vn at January 22, 2022. This is cached page on Talk Vietnam. If you want remove this page, please contact us.