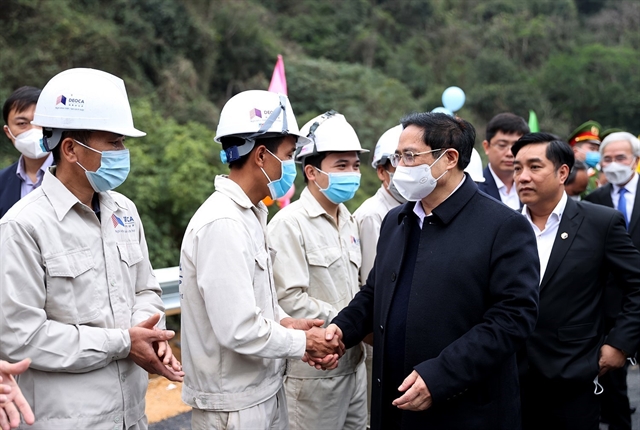 HÀ NỘI — Prime Minister Phạm Minh Chính attended the inauguration ceremony of the Tình Yêu (Love) Bridge, the first phase of the coastal ring road of Hạ Long – Cẩm Phả as well as the opening of Vân Đồn – Móng Cái Expressway in the north-eastern province of Quảng Ninh on Wednesday.

The bridge, the coastal ring road and the expressway are major traffic works for the province.

The bridge is the first in the province with six lanes. It has a length of over 4.2 km with a total investment of more than VNĐ2.1 trillion (US$93 million).

After the bridge opens, it is expected to help reduce the load on the Bãi Cháy Bridge as well as connect traffic in Hoành Bồ District with the centre of Hạ Long City.

The coastal ring road, with a total length of 18.7km, is expected to open opportunities for urban development in the province.

The coastal ring road, worth VNĐ2.3 trillion ($101.7 million), expands the space for urban and tourism development between the province's Hạ Long City and Cẩm Phả City.

Speaking at the ceremony, Chính said developing infrastructure, especially traffic infrastructure, and improving the business environment would create favourable conditions for both domestic and foreign investors.

“Transport development is important, contributing to restructuring and redirecting economic development towards sustainability,” he said.

The province had also effectively implemented the planning, which was approved by the Prime Minister, and seven strategic plans of the province that created suitable regional connections with the Party’s policy on co-operation and development of “Two corridors and one economic belt” between Việt Nam and China in the new context, he said.

Chính said the implementation of strategic transport projects would not only help connect traffic in the province but also connect the Hồng (Red) River Delta and the north-central region with China.

It would contribute to promoting economic development and improving the lives of local people, he said.

Chính said he highly appreciated the efforts and coordination among construction units and local authorities to implement the projects, especially during the COVID-19 pandemic.

When Chính visited the workers who worked on the expressway, Chính wished all officials and workers and their families a safe and warm Lunar New Year.

On behalf of leaders of the Party, State and Việt Nam Fatherland Front, Phúc sent his greetings and best wishes for the Lunar New Year to the Party Committee, authorities, soldiers and people of the city.

He said that the Party and State had directed ministries, branches and localities to pay attention to people with meritorious services to the revolution; poor households; underprivileged workers and people affected by Agent Orange/dioxin so that no one is left behind and everyone can enjoy Tết .

Speaking at the handover ceremony, Huệ said HCM City was returning to the new normal, with the number of serious COVID-19 infections and deaths hitting a record low so far.

He also lauded the municipal Party Committee for ensuring social welfare and security for residents, including over 300,000 revolution contributors, 45,000 poor households, and 155,000 social policy beneficiaries each year.

He wished that they would accomplish all socio-economic development tasks in 2022, contributing to the fulfilment of socio-economic targets set by the NA this year and targets in the Resolution adopted by the 13th National Party Congress.

In the afternoon of the same day, the top legislator and his delegation also visited and handed over gifts to staff and children at the city’s Centre for Rehabilitation and Support for Children with Disabilities.

The centre is now home to 10,172 malnourished orphans, from newborn babies to those aged 15 from the city and southern localities. — VNS

PM Chính attends inauguration ceremony of bridge, ring road and expressway in Quảng Ninh have 962 words, post on vietnamnews.vn at January 26, 2022. This is cached page on Talk Vietnam. If you want remove this page, please contact us.