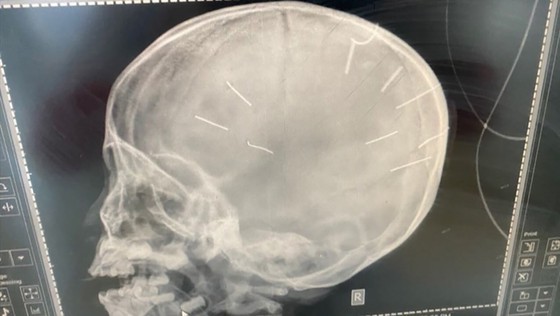 An X-ray shows nine nails in the three-year-old girl's skull. — (Photo courtesy of the Thach That General Hospital)
The girl was taken to hospital on Monday afternoon by her mother.

Dr. Vuong Trung Kien, Director of the Thach That General Hospital, said that the girl was in a coma and having convulsions with many unusual symptoms.

Doctors diagnosed that the girl baby had meningitis caused by infection, possibly caused by foreign objects found in her skull. She was transferred to the upper-level Saint Paul General Hospital, which conducted an X-ray scan and found nine nail-like objects embedded in her skull.

The girl has a complex medical history. About five days before being admitted to Thach That Hospital, she showed signs of ear pain. When her family bought medicine for her, she vomited three times a day. Thirty minutes before entering the hospital, she vomited again.

She had a broken arm two weeks ago. Three months ago, the girl was poisoned with pesticides and was treated at the National Pediatrics Hospital.

Seeing the girl in an abnormal condition, Thach That District General Hospital immediately informed the police.

N.T.L, the mother of the girl, is divorced with three children. Her two older children live with her ex-husband and the three-year-old girl lives with her and her boyfriend.

Initial investigation by Thach That District Police suggests the boyfriend may have caused the injuries.

The girl is under treatment at the Pediatric Emergency Department, Saint Paul General Hospital, in critical condition.

Man suspected of violent assault of three-year-old girl have 502 words, post on www.sggpnews.org.vn at January 20, 2022. This is cached page on Talk Vietnam. If you want remove this page, please contact us.