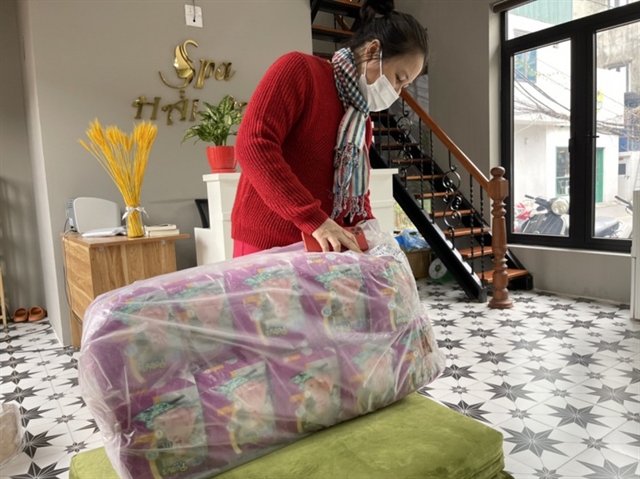 Thủy opens a package of diapers donated by her friends to the child patients at her residence. — Photo dantri.com.vn

HÀ NỘI — Six years ago when Ngô Thanh Thủy was hospitalised with interstitial lung cancer, she hoped she could do something for the less fortunate people that she witnessed during her treatment at the medical facility.

For the past two years, she has turned her house into a 'base' offering free food and accommodation for families of child patients.

It is just one of her many charitable activities, which include giving out free meals, providing financial support, and organising free bus rides for poor patients.

Speaking to Dân Trí newspaper, Thủy said she had just welcomed two families to her residence.

One of them has now gone into the hospital to prepare for their child's surgery, while the other whose child has cerebral palsy will stay for an extended period.

A patient with cancer herself, Thủy understands more than anyone the fine line between life and death.

At the beginning of August 2015, Thủy suffered from a prolonged fever. When she went to the National Hospital for Tropical Disease for examination, she was diagnosed with interstitial lung cancer.

"I was devastated. I was only 36 years old with three children, the eldest 14 and the youngest three. I kept thinking how they would live if I was not here anymore," she said.

During her treatment at the hospital, Thủy often shared her food with less privileged patients. There was even a couple who split a single egg for their main meal and waited for charity the rest of the time. They said they didn't dare spend money on food as they needed to save for hospital fees.

Witnessing numerous patients who could not afford treatment, Thủy found that she was lucky and could help, even though she was not well-off.

"I still needed to borrow from my family, but nevertheless I had a job to pay off the debt. Strangely enough, when I was hospitalised, my spa was doing very well. I wondered if it was because I would pass away soon that God gave me this luck."

Thủy thought she needed to share her good fortune with others. She asked her husband and staff to cook more to share with other families at the hospital.

Seeing how everyone was having a hard time doing everyday chores with no hot water, she invited people over to her house to wash and sleep, so that they did not have to spend the time in hospital hallways and on benches.

Two years ago, she and her family moved their home spa to a new house. If they put it up for rent, their previous home would have brought in a decent amount, as it was located on busy Giải Phóng Street.  However, Thủy was determined to turn it into a base for patients and their families in difficult circumstances.

Thủy has seen numerous cases coming to Hà Nội from various provinces for treatment. Many of them arrive before sunrise, so they need to rent a place or wait outside the hospital gates until opening

"Since the pandemic started, it has not been easy to find a place for the night. The more I thought about these people's hardship, the more I was motivated to turn my house into a base for them," she said.

Thủy is also an active member of her friend's charity, which offers free rides for poor patients returning home or that have to travel a long way from their province to the hospital in Hà Nội.

"They just need to inform me how many people will arrive in Hà Nội, at what time, and I will get everything prepared for the patients and their relatives," Thủy said.

A mother and child staying at Thủy’s charity ‘base’. — Photo dantri.com.vn

She cannot remember how many children and families she has opened her door to over the past two years. There were cases that were so heart-wrenching that they haunted her for months.

Just last month, she welcomed a mother and child from Hà Giang Province who had gone to Bạch Mai Hospital for treatment.

"The mother was just my age but looked old and worn-out. She had seven children, but four of them had already passed away due to hypertrophic cardiomyopathy. Now her youngest child is diagnosed with the same illness," said Thủy. "She told me there was nothing more painful than helplessly seeing your children leave you one by one."

Last December, one of the children sent back home was Khang from Điện Biên Province, a three-year-old with incurable neuroblastoma. His whole body was covered with oozing lumps. Feeling pity for the child, Thủy talked to his doctor and even raised money and bought flight tickets for Khang and his mother, so that he would not have to endure such a long journey home.

"Yesterday afternoon, Khang's mother texted me and said that he was at home, barely breathing. As they landed in Điện Biên City, the father came to pick them up, and all of them had to ride a bike for another eight hours. It was saddening," Thủy said.

Among the residents in the house are Hương and her son. She had to leave her youngest daughter at home when the child was just two months old, in order to seek treatment for her elder son's congenital cerebral atrophy.

"We have gone to every place. I brought my son anywhere that people told us that there is a good physician or cure. We ask for food to live by the day," Hương said.

Although doctors at major hospitals told her that she should take the child home as there is no cure, the young mother is not ready to accept such a fate.

Seeing her determination, Thủy has promised to help them catch a taxi to Hà Đông District for a medical examination.

Lung cancer patient opens her doors to the less fortunate have 1302 words, post on vietnamnews.vn at January 17, 2022. This is cached page on Talk Vietnam. If you want remove this page, please contact us.