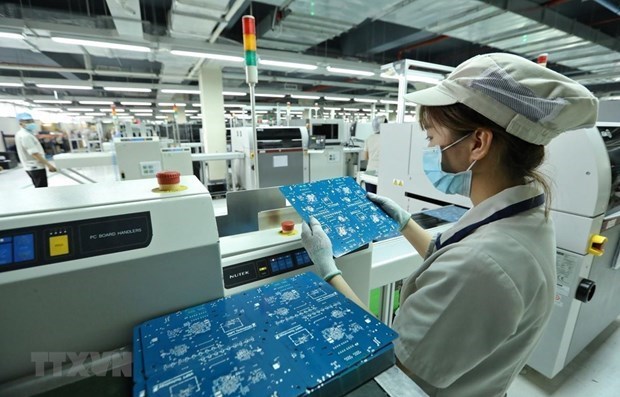 Worker at a factory in Vietnam (Illustrative photo: VNA)

Kien Giang (VNA) – The industrial production value of the Mekong Delta province of Kien Giang is estimated to hit more than 4.33 trillion VND (191.42 million USD) in January, posting a month-on-month rise of 6.89 percent and up 9.48 percent from the same period last year.

According to the provincial Department of Industry and Trade, of the amount, mining raked in 31 billion VND, rising 21.1 percent; and manufacturing and processing, over 4.1 trillion VND, up 9.44 percent.

Export revenues may reach 71 million USD in the month, representing a year-on-year surge of 37.4 percent and meeting 9.1 percent of the year's plan.

The province basically brought COVID-19 under control in late months of 2021. Relevant agencies have helped businesses engage in trade promotions to bolster consumption at home and exports. They also regularly update information on markets that are on the road to recovery, and facilitate the exportation of the province’s key staples such as rice and fishery products.

This year, Kien Giang has set a target to increase the province's industrial production value by 8 percent against that in 2021, equivalent to 51.18 billion VND. The province expects to earn 780 million from exports./.

Kien Giang’s industrial production value rises over 9.48 pct in January have 391 words, post on en.vietnamplus.vn at January 21, 2022. This is cached page on Talk Vietnam. If you want remove this page, please contact us.