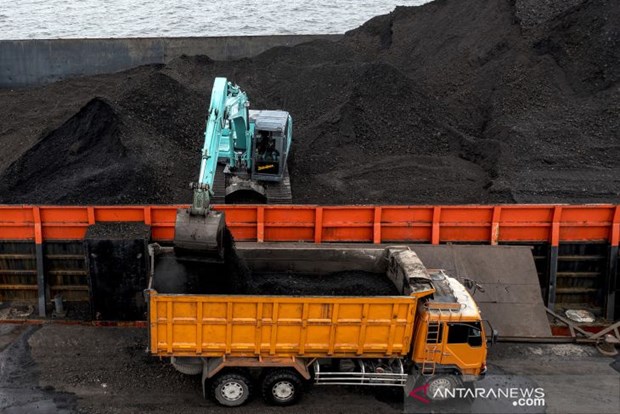 A worker operates an excavator to load coal onto a truck at the PT Karya Citra Nusantara (KCN) Port, Marunda, Jakarta, on Wednesday (January 12, 2022). (Photo: ANTARA)

Indonesia, the world's biggest thermal coal exporter, on January1 imposed a month-long export ban without warning, causing jitters in markets and among major importers such as Japan, the Philippines and the Republic of Korea (RoK).

The country's authorities have started a calibrated easing for firms that meet a Domestic Market Obligation (DMO), which was introduced to ward off widespread power outages after local plants reported critically low coal inventories.

Authorities have blamed the coal supply saga on poor compliance of the DMO policy, under which coal miners must sell a quarter of their output to local buyers, with a 70 USD per tonne price cap for power generators.

Ridwan Djamaluddin, director general of minerals and coal at the energy ministry, said 75 ships had been allowed to load coal from firms that had met all their DMO requirements, while 12 more had been allowed to proceed having provided a written assurance of compliance and acceptance of penalties.

Another ministry official on January 18 said coal stocks at local plants had improved and authorities had stepped up monitoring of deliveries to generators.

The ministry has set a target of enabling local power plants to have enough inventory by the end of January for more than 20 days of operations./.

Indonesia lifts coal export ban on 139 firms have 490 words, post on en.vietnamplus.vn at January 21, 2022. This is cached page on Talk Vietnam. If you want remove this page, please contact us.