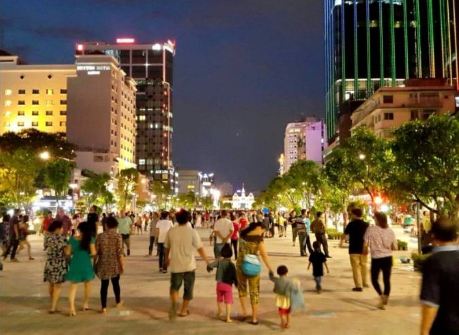 Vehicles are set to be banned on parts of Nguyễn Huệ Street to set up the annual Flower Street and Book Street for Tết. — Photo: nld.com.vn

HCM CITY — HCM City has announced the annual closure of certain roads in the downtown area to set up Flower Street and Book Street for Tết, which falls on February 1 this year.

According to the Department of Transport, from January 13 to 28, when the flower street is being set up, vehicles are banned  from using turning point at Nguyễn Huệ Street near Tôn Đức Thắng Street.

From Jan 19 to 28, when the book street will be set up, vehicles will also be banned from using the stretch on Nguyễn Huệ Street from Tôn Đức Thắng to Nguyễn Thiệp Street as well as Ngô Đức Kế and Mạc Thị Bưởi streets.

During Tết from Jan 29 to Feb 5 vehicles will be banned on Nguyễn Huệ, Mạc Thị Bưởi and Ngô Đức Kế.

There will also be restrictions in streets like Nguyễn Thiệp, Lê Lợi, Huỳnh Thúc Kháng, and Tôn Thất Thiệp.

The Department of Culture and Sport has said there will be no fireworks displays on Lunar New Year’s Eve for a second straight year due to COVID.

The firework displays for New Year’s Eve had also been cancelled this year.

But other annual activities to celebrate Tết, including a spring flower market, will go ahead. — VNS

HCM City bans vehicles in parts of District 1 to prepare for Tết have 454 words, post on vietnamnews.vn at January 14, 2022. This is cached page on Talk Vietnam. If you want remove this page, please contact us.