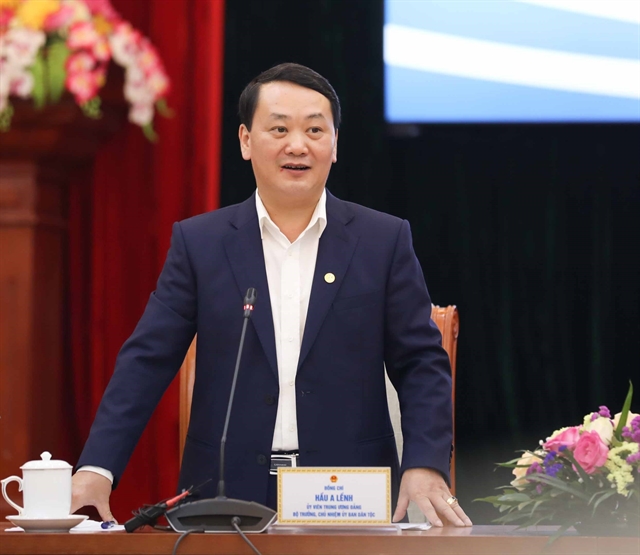 Minister-Chairman of the Committee for Ethnic Minority Affairs Hầu A Lềnh spoke to Voice of Việt Nam (VOV) about the National Target Programme on socio-economic development for ethnic minority and mountainous areas for 2021-2030, a Government commitment to sustainable development goals and ensuring that 'no one is left behind.'

2022 is the first year for phase one of the national target programme on socio-economic development in ethnic minority and mountainous areas. Could you elaborate on what aspects will be the priority?

In the National Target Programme on socio-economic development in ethnic minority and mountainous areas for 2021-2030, phase 1 from 2021 to 2025 includes 10 sub-projects.

However, as we enter 2022, creating the foundation for the following years, the Committee for Ethnic Minority Affairs has agreed with central ministries and departments to include funding allocation into the plan.

The focus is to resolve issues in housing, residential land, production land, and potable water. These are crucial to the people.

The second thing is to complete a comprehensive operating mechanism between the central and the local governments, which requires substantial resources.

The third focus is on digital transformation, which is at the core of building systems of indicators to evaluate the programme process.

Alongside these tasks, we also allocate part of the 2022 fund for other areas, including health, education, culture, and national defence and security, as well as advocacy work, training, and capacity building for the management teams of all levels of the programme. We also pay attention to strengthening the central and local steering committees to ensure coherence and consistency between levels.

What is your opinion on the advantages and challenges of deploying the national target programme when the country is witnessing severe socio-economic impact due to the pandemic?

The first advantage is that the investment decision for the Prime Minister has ensured sufficient funding for the programme, which is VNĐ104 trillion from now until 2025. Communication work has begun and people are starting to be aware of the issue.

The sub-projects in the programme are built on the basis of the needs and thorough review in the localities, ministries and departments, therefore the implementation process responds to the most urgent needs and wishes, acting as a lever to stimulate the people's capacity to escape poverty.

However, major problems remain. In the recent outbreak, people's lives have been difficult and will continue to be. This will affect their internal strength. Localities have already faced more difficulties than at the initial stage of the programme.

In addition to that, real-life problems could arise, such as the increase of poor households and communes. Therefore, the expansion of subjects and locations will reduce the funds allocated. If these communes are not invested in, it will cause confusion among people, and there needs to be an explanation, an answer and appropriate compensation.

These are the immediate challenges that we have identified and we are generating solutions to coordinate with ministries and departments to address these issues.

With the challenges that you have just mentioned, what do departments and localities need to work on to reduce wastefulness, or even corruption, when implementing the sub-projects?

I believe that preventing wastefulness during the programme implementation process, or even corruption, cannot be ruled out. According to the direction of the Party and the Government, the regulations and paperwork, responsibility, and power decentralisation will be limitations.

A solution of utmost importance is building a system that clearly define the tasks, authority and above all the responsibility at each level.

In addition to strictly following the State management system, it is necessary to mobilise the supervision of the National Assembly, People's Council at all levels, and especially the Việt Nam Fatherland Front, as well as socio-political organisations, the people, and the media.

I believe that if all of these measures are implemented in sync, they will minimise misspending for the wrong subjects and places, or signs of policy violations. We have also taken notice of this issue during the development of paperwork and regulations. — VNS

Funding prioritised for ethnic minority socio-economic development have 833 words, post on vietnamnews.vn at January 13, 2022. This is cached page on Talk Vietnam. If you want remove this page, please contact us.