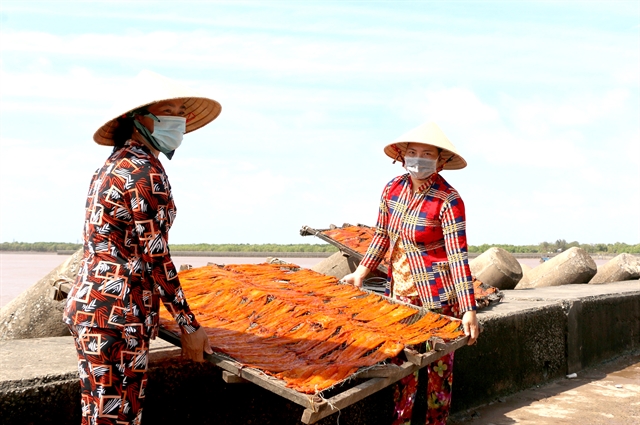 Đông Hải District has the largest number of fishing boats in the Cửu Long (Mekong) Delta province and its dried fish products are famous nation-wide.

It produces various items, mostly from marine creatures like stingray, solefish, cuttlefish, and shrimp, manually and dries them in the sun.

Production establishments here are busy all year round but the busiest period is the run-up to Tết.

Nguyễn Thị Mộng Tuyền, who has made dried fish in the district's Gành Hào Town for more than 20 years, said around the end of November every year her family began to produce for Tết .

To make quality products, every stage including choosing raw fish, cleaning them, marinating and drying them, and packaging the finished items must be done properly, she said.

Besides households, there are also more than 30 establishments, mostly in the town, that produce around 700 tonnes of dried fish every year, according to the district People's Committee.

For Tết this year they and the households are expected to produce more than 30 tonnes, sell a third in the province and the rest elsewhere in the delta and in HCM City.

Trần Thị Bé, owner of a trading establishment in Gành Hào, said raw fish supply was low this year because of difficulties in going to sea, and so prices during Tết would be higher than in previous years.

In addition, the impact of the COVID-19 pandemic had caused dried fish producers to reduce their production because they were afraid of sale difficulties, she said.

Nguyễn Trọng Hán, deputy chairman of the district People's Committee, said to improve the value of dried fish products, the district had strengthened quality checks and carried out trade promotions in recent years.

It had also strived to bring them under the national 'One Commune – One Product' (OCOP) programme under which products are classified and given a one- to five-star ranking.

Dried fish producers prepare for peak Tết season have 594 words, post on vietnamnews.vn at January 18, 2022. This is cached page on Talk Vietnam. If you want remove this page, please contact us.