Hanoi (VNA) – The High-Level People's Court in Hanoi on January 21 reopened an appeal trial for the case that occurred at the Ministry of Industry and Trade (MoIT), Saigon Beer – Alcohol – Beverage JSC (Sabeco) and Ho Chi Minh City , causing a loss of over 2.7 trillion VND (119.25 million USD) for the State, despite the absence of defendant ex-Minister of MoIT Vu Huy Hoang.

The trial was suspended late December 2021 due to the absence of Hoang and Minh who were under medical quarantine, along with the absence of representatives from Sabeco and some lawyers.

As Hoang and Sabeco continued to submit an application for a trial in absentia, representatives from the High-Level People’s Procuracy in Hanoi and lawyers asked that the trial proceeds as planned because their absence would not affect the trial.

Earlier, at the instance trial, the Hanoi People's Court sentenced Hoang to 11 years' imprisonment and Dung to nine years in prison for "violating regulations on the management and use of State assets, causing losses and wastefulness". 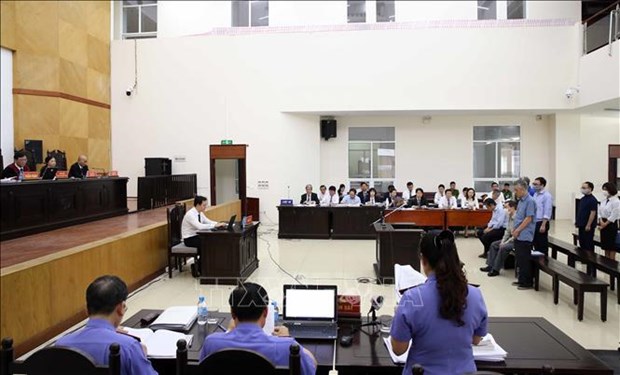 The appeal trial is held despite the absence of defendant ex-Minister of MoIT Vu Huy Hoang . (Photo: VNA)

According to the indictment from the Supreme People's Procuracy, the Saigon Beer – Alcohol – Beverage JSC (Sabeco), which is under the MoIT's management, was given more than 6,000 sq.m of land at the No. 2-4-6 on Hai Ba Trung street in downtown HCM City for production and business purposes.

However, Hoang, Dung, and former Deputy Minister of the MoIT Ho Thi Kim Thoa, who has fled, directed subordinates at the ministry and Sabeco to carry out procedures for using land use rights and Sabeco’s money as capital contributions to set up Sabeco Pearl, a joint venture between Sabeco and a number of private enterprises, to implement a project building a hotel, a trade and convention centre, and office space for lease on the land plot.

After Sabeco completed legal procedures for the joint venture's investment and proposed the HCM City People's Committee approve the addition of officetel and housing functions to this project, the MoIT ordered the company to divest its entire stake in this project.

This was illegal and resulted in the loss of over 2.7 trillion VND to the State./.

Appeal trial for ex-Minister of Industry and Trade Vu Huy Hoang resumes have 667 words, post on en.vietnamplus.vn at January 21, 2022. This is cached page on Talk Vietnam. If you want remove this page, please contact us.