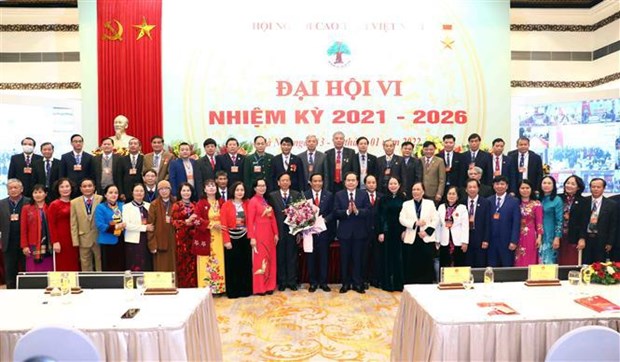 Vice Chairman of the National Assembly Tran Thanh Man (eleventh from the right) poses a photo with the new executive committee of the Vietnam Association of the Elderly in its congress on January 14. (Photo: VNA)

Hanoi (VNA) – Vice Chairman of the National Assembly Tran Thanh Man stressed the need to issue additional policies for better care and protection of Vietnamese senior citizens at the sixth Congress of the Vietnam Association of the Elderly on January 14.

Held both in in-person and virtual forms, the congress gathered over 400 delegates, representing some 9.7 million members of the association nationwide.

In her opening remarks, Chairman of the Vietnam Association of the Elderly's Central Committee Pham Thi Hai Chuyen said over the last five years, the association has actively engaged in the formation of important legal documents and policies designated for the elderly.

Chief among these are the national action programme on older people for the 2021 – 2030 period and policies on social security and health insurance which have helped enhance elderly care and promote their role in society, she said.

The Vietnamese elderly have also further upheld their role in building the Party and the government, preserving traditional cultural values, safeguarding the country's sovereignty over land and maritime territories, maintaining social order and security, fighting crimes and corruptions, protecting the environment, and developing new-style rural and civilized urban areas.

NA Vice Chairman Man, for his part, hailed the association for its dedicated commitment in fostering the elderly care and engaging them in socio-economic development and national construction and safeguarding. The association has been functioning well as the voice of the elderly, representing their wishes, legitimate rights and benefits, he said.

Now, 95 percent of the elderly in Vietnam are health insurance holders. Most hospitals are giving priority in healthcare services for those aged above 80 years old./.

Additional policies needed for better elderly care: NA Vice Chairman have 613 words, post on en.vietnamplus.vn at January 14, 2022. This is cached page on Talk Vietnam. If you want remove this page, please contact us.