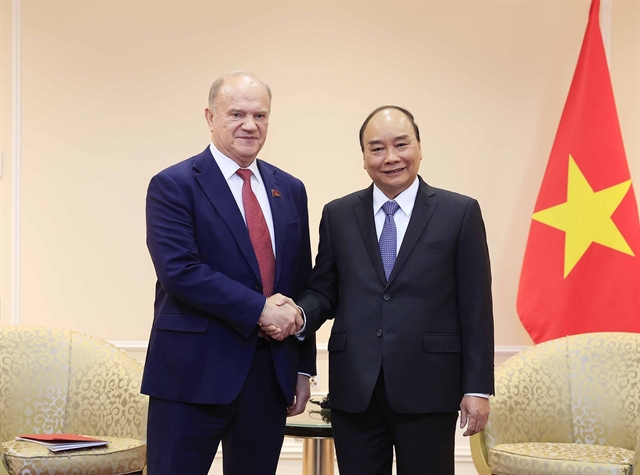 MOSCOW — Việt Nam wishes to foster cooperation with Russia across fields and channels, including the traditional friendship with the Communist Party of the Russian Federation (KPRF), President Nguyễn Xuân Phúc told the Party’s chairman Gennady Zyuganov in a meeting in Moscow.

He applauded the KPRF's role and contributions to the Việt Nam-Russia relations, stressing that the Communist Party of Việt Nam (CPV) and the Vietnamese State always keep in mind the great support of the Russian Party and people during Việt Nam's past struggles for national liberation as well as the present cause of national development.

Zyuganov congratulated Việt Nam on achievements the country has recorded in the recent past despite impacts of the COVID-19 pandemic, including the successful organisation of the 13th National Party Congress.

He expected President Phúc's visit would contribute to creating a new impulse for the bilateral ties, and stated that the KPRF always backs the enhancement of cooperation with Việt Nam.

Phúc expressed his belief that under the leadership of Chairman Zyuganov, the KPRF will further consolidate its important role in political fields, contributing to building a prosperous and powerful Russia.

The two sides consented to further promote collaboration through all-level delegation exchanges and meetings, and close coordination at multilateral forums.

On the occasion of the 150th anniversary of V. I. Lenin (April 22, 1870), KPRF Chairman Zyuganov presented an insignia to President Phúc. — VNS

Việt Nam wants to strengthen friendship with Russian Communist Party: President Phúc have 478 words, post on vietnamnews.vn at December 3, 2021. This is cached page on Talk Vietnam. If you want remove this page, please contact us.