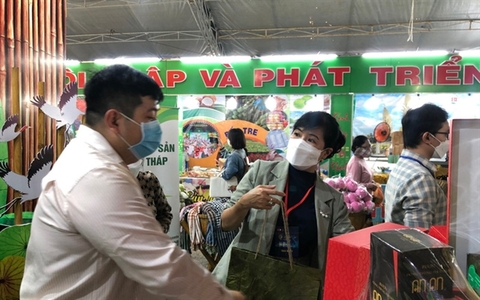 Customers at the goods supply – demand link-up conference and exhibition at the Phu Tho Stadium in HCM City's District 11. — Photo nld.com.vn

A conference to set up links between sellers and buyers of various consumer goods in HCM City and 45 provinces has opened at the Phu Tho Stadium in the former's District 11 with more than 600 pavilions.

The event, ending on Sunday, was aimed at expanding the market for domestically produced goods of high quality and with reasonable prices and potential for exports, enabling the branding and expansion of market shares for local specialties.

It is being held for the 10th year after starting in 2012 with only 14 provinces and cities participating.

The City Department of Industry and Trade said it would set up transaction and display centres for provinces and cities around the country to showcase their goods to local businesses and consumers.

The city will also organise the 2021 Promotion Fair from December 21 to 26 at the Phu Tho Sports Stadium with more than 450 booths showcasing consumer goods, farm produce and handicrafts without the 50 per cent discount cap in force and with gifts and lucky draws.

Participating businesses need to ensure the origin and quality of their products.

Bui Ta Hoang Vu, director of the department, said promotions are important for businesses and consumers to meet.

This year, due to the pandemic, total retail sales in the city has halved from last year. In the last two months of the year, with policies to stimulate demand and focused promotions, the city hopes to stimulate consumption, even of foreign branded products, by offering low prices.

The Ministry of Industry and Trade will organise a month-long programme called 'National Focused Promotion Month' in December. — VNS

Provinces showcase consumer goods in HCM City, hope to tie up with local sellers have 472 words, post on bizhub.vn at December 5, 2021. This is cached page on Talk Vietnam. If you want remove this page, please contact us.