In addition to accelerating the construction progress to soon hand over shop houses and apartments from the third quarter of 2022 before Metro Line 1 is completed and put into operation, Metro Star project has also achieved a series of important progress in legality, which affirms that the project is not public land. This is the firm foundation for Metro Star to promise to create a great attraction in Thu Duc City as well as in the East Saigon area.

Not only drastically fighting the pandemic, Metro Star Company of CT Group is also a bright spot of the business community to rebuild the post-lockdown economy in Thu Duc City. Right from the beginning of October, Metro Star construction site has been busy again with the close supervision of Apave – a famous French supervising company.

With the superior advantage of being a unique location right at the largest roundabout on Hanoi Highway, close to District 2, on the most beautiful Boulevard in the East of Saigon, connecting to Ring 2 via Pham Van Dong and Mai Chi Tho Boulevards, it is very fast and convenient to go to the directions of East, West, South, North. In particular, Metro Star is also a rare project with a pedestrian bridge that connects directly with Metro Station No. 10 to central stations of District 1. Moreover, Metro Star also possesses a great attraction when it converges Singaporean design quintessence inspired by Gardens by the Bay and a green living space of Singapore- the lion island nation, which is very effective and close to Vietnamese people; there is a unique shopping – entertainment – food street according to the model of Meyongdong Street (Korea) appeared for the first time in Vietnam, etc. All of them promise to create the most outstanding feature for Thu Duc young city and the East of Saigon. 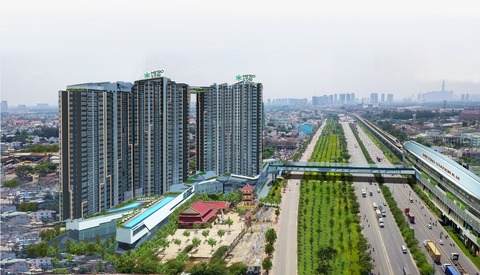 Because of many eye-catching highlights above, Metro Star is always carefully scrutinized. The Investor always pays great attention to the legal aspect of the project. Metro Star has made new advance with the completion of the explanation of all inquiries from authorities and customers that project land is not public one.

Specifically, Transportation and Public Works Company Limited was assigned to implement this project on July 25, 2005, according to Steering Committee 80 of the Prime Minister. The project was licensed for construction in 2008 and the foundation was completed in 2012. According to the process of equitization approved by the State in Decision 3246/QD-UBND dated July 2, 2015 of the People’s Committee of Ho Chi Minh City, the project was included in the enterprise value for equitization and held an auction to sell shares widely to people and businesses. Right after that, it was passed through Ho Chi Minh City Stock Exchange (HOSE). From that time, the project is no longer public land.

After that, in 2016, Metro Star Investment Joint Stock Company was transferred the project from Transportation and Public Works Joint Stock Company, which became a private company under the State’s equitization process. According to Decision No. 5268/QD-UBND dated October 7, 2016 of the People’s Committee of Ho Chi Minh City, the transfer of the Project between two private companies has complied with the following regulations: The project has been granted a land use right certificate in accordance with the master plan; has a construction permit, the foundation has been accepted and completed. The transfer of the Project must be announced on the mass media, specifically on 3 consecutive newspapers 15 days before the transfer and without any complaints.

Land legality is currently the most important thing, Metro Star project has also fulfilled its financial obligations for the entire land area, and was re-issued the long-term residential land use right certificate by the Department of Natural Resources and Environment with number CT80499 on June 15, 2020.

In addition, the project has also been approved in the housing development plan in Document No. 1757/QD-UBND dated May 8, 2019 by the People’s Committee of the City, 1,468 apartments are recorded in the Metro Star project; The Department of Industry and Trade also approved the model contract in document 7234/TB-SCT dated December 24, 2020. Notice No. 218/TB-VP dated March 30, 2021 of the People’s Committee of Ho Chi Minh City clearly stated that the project is eligible to be sold or leased in the future with the number of houses of the project according to the planning targets and completed financial obligations.

The receipt of the deposit for the reservation is subject to an agreement under the Civil Law. Recently, the Departments have also reported the process of review of land and equitization to report to the People’s Committee of City. 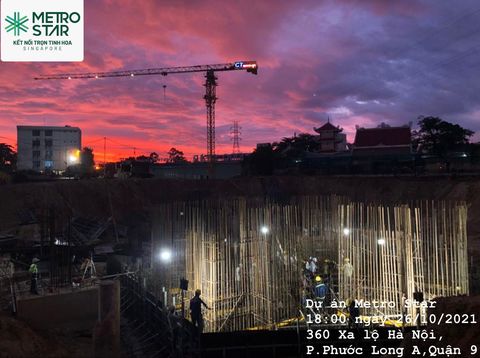 Currently, Metro Star Company is also a bright spot in economic reconstruction after the social distancing, the construction site is very active all days and nights and is preparing to complete the ground floor for Christmas this year. With the commitment of construction of a floor for 6 days of the contractor CC14 (under Construction Corporation No. 1) and completed legal documents, the project will hand over the shop houses and apartments from the third quarter of 2022 before Metro line 1 is completed and put into operation, promising to create a great attraction for investors and residents.

Promoting construction with full legality, Metro Star heats up Thu Duc real estate market have 1087 words, post on bizhub.vn at December 1, 2021. This is cached page on Talk Vietnam. If you want remove this page, please contact us.