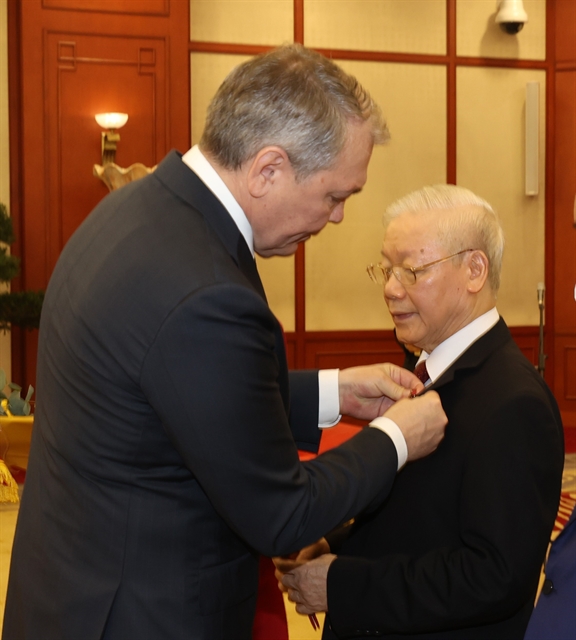 On behalf of the KPRF Central Committee, Vice Chairman Leonid Kalashnikov presented the Vietnamese leader with the noblest prize of the KPRF and the former Communist Party of the Soviet Union.

He affirmed that the prize demonstrates the respect for and recognition of the prominent contributions by General Secretary Trọng, a brilliant politician highly valued in Russia and the world, as well as his unceasing efforts to solidify the Việt Nam – Russia relations.

Việt Nam's success is a vivid illustration of the fact that socialism has been materialised, Kalashnikov said, stressing that the KPRF always attaches importance to the traditional friendship with the CPV and wishes that bilateral ties will be enhanced further, helping to promote the Việt Nam – Russia comprehensive strategic partnership, for the sake of the two peoples and for regional and international peace and stability.

For his part, General Secretary Trọng described the Lenin Prize as not only a recognition for himself but also the KPRF and Russian people's respect for and sentiment towards the Vietnamese Party, State, and people. It is also a demonstration of the special long-standing ties between the CPV, the Vietnamese people and the Communist Party and people of the Soviet Union in the past and the Russian Federation at present.

He also highly valued Russia's achievements in promoting national development and raising its stature in the international arena, along with the growth of the KPRF.

Trọng thanked the enormous, wholehearted, and effective assistance that the former Soviet Union and today's Russia have given to Việt Nam. He pledged to join the KPRF and Russian partners to keep strengthening the comprehensive strategic partnership between the two countries and the friendship between the two peoples. VNS

Party leader honoured with Lenin Prize of Russian Communist Party have 498 words, post on vietnamnews.vn at December 16, 2021. This is cached page on Talk Vietnam. If you want remove this page, please contact us.