HÀ NỘI — The Ministry of Culture, Sports and Tourism on Thursday officially re-appointed Lee Chang-kun, a descendant of the Vietnamese Lý Royal family, as the ambassador for Vietnamese tourism in South Korea between 2021 and 2024.

This is his second term in this role.

Lee Chang-kun (Lý Xương Căn in Vietnamese) in this term will develop the Việt Nam Tourism Promoting Office in Seoul, update the Korean-language website of the agency; further promote Việt Nam’s image in South Korea; and connect localities between the two countries to attract investments. 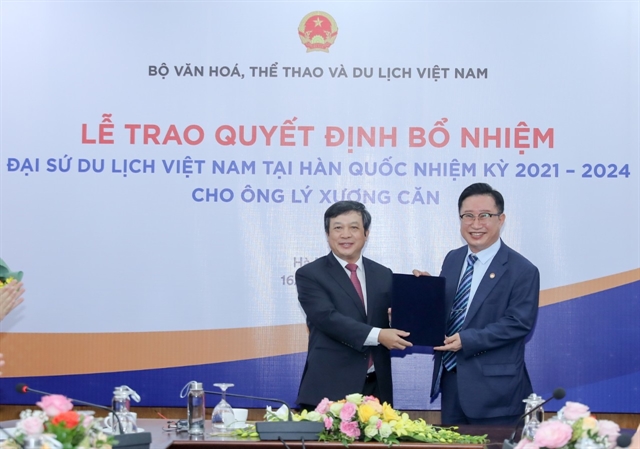 "The re-appointment marks our acknowledgment for Mr Lee's effective contributions in PR-ing and co-operating in the tourism field between the two countries in his first term between 2017 and 2020," said culture deputy minister Đoàn Văn Việt at the re-appointment ceremony.

"The act will encourage Mr Lee and his colleagues to make further efforts to fulfill their missions in the upcoming challenging years.”

Việt noted that the event was very meaningful.

"In terms of history, this is a link between Việt Nam and Korea, which started from nearly 900 years ago when royal members of the Lý family emigrated from Việt Nam to the Korean peninsula.

"We are happy to witness their descendants like Mr Lee continue to dedicate for Vietnamese people, and for the friendship and co-operation between the two countries."

Lee said though his Vietnamese capability was poor; his Korean language was good so he understood Korea.

"I was born and raised up in South Korean while Việt Nam is the homeland of my ancestors," he stressed. "The two countries are of the same importance to me, like my father and mother."

Lee said his plan in 2020 was gathering five million visitors from South Korea to Việt Nam, which was halted by the pandemic.

"I hope the pandemic will be soon controlled, life becomes normal again soon and a better future will be opened up," he said.

"The year 2022 is remarkable as it marked the 30 anniversary of relationship between the two countries.

"I feel moved as the combination between Việt Nam and South Korea is a kind of relationship that is holier than a predestined affinity, which is irreplaceable."

Lee said his term is not only an honour but also a chance for him to express his sincereness and determination to contribute to Vietnamese tourism.

In his first term, Lee established a website about Vietnamese tourism in the Korean language, supported connection between ministries, localities in the two countries to host Việt Nam activities in festivals in Yong San, Jongno, Guro and Qwanggjin.

The 31st-generation descendant of the Lý Dynasty founding father, King Lý Thái Tổ (974-1028), Lee has volunteered to serve as the Tourism Promotion Representative of the Vietnam National Administration of Tourism in Korea during the term 2019-2020.

Lee was born in 1958 in Seoul. He was granted Vietnamese citizenship in 2010. There are about 800 Vietnamese people who are descendants of the Lý Dynasty living in Korea. Lee is the direct lineage descendant of the family and is a major influence on the Vietnamese community in Korea.

According to Nguyễn Phú Bình, former foreign minister and former Vietnamese ambassador to South Korean, Lee has expressed his sincereness and willingness to sacrifice for Việt Nam.

"I know that not only him but also his family members have sacrificed for Việt Nam," Bình noted. "I hope the State has some favourable policies for him to fulfill his duties better." — VNS

Lee Chang-kun re-appointed as Việt Nam tourism ambassador in Korea have 703 words, post on vietnamnews.vn at December 18, 2021. This is cached page on Talk Vietnam. If you want remove this page, please contact us.