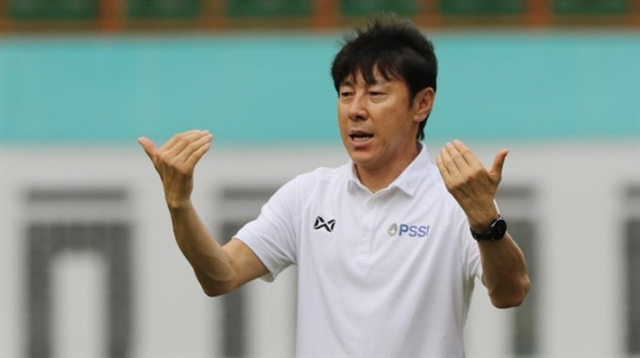 According to Indonesia manager Shin Tae-yong, Việt Nam is the strongest opponent in Group B of the 2021 AFF Suzuki Cup. Photo courtesy of the Football Association of Indonesia.

The Group B draw pitted three heavyweights of Việt Nam, Malaysia and Indonesia against each other. They are also the three teams that faced each other in the second round of the 2022 World Cup qualifiers.

In the World Cup second-round campaign, only Việt Nam qualified for the next round, while Malaysia ranked third and Indonesia was at the bottom of the table with just one point after eight matches.

"We are in the same group with many strong opponents, especially Việt Nam, the defending champions of the tournament," Shin said.

"Beside Việt Nam, Malaysia is our rival. Cambodia and Laos have also made progress in recent years.

"Honestly, I can’t promise to help Indonesia win the cup even with great support from our fans. What we can promise now is to play the best we can and hopefully good results will come."

Talking about the team’s weaknesses, Shin admits that his team has been struggling with the scoring since the World Cup second-round qualifiers.

"I know that Indonesia had a problem with scoring goals in the 2022 World Cup Qualifiers and in the national league. We will try to come up with better attacking options for the team at the AFF Cup to get the best results," said the 52-year-old manager.

"This is my first AFF Cup. I hope that I will have a successful tournament with Indonesia."

Before managing Indonesia, Shin Tae-yong has been compared with Việt Nam's Park Hang-seo since the two Koreans used to manage their national team as well as other football clubs in the Korean football league system, in which the younger Shin achieved more success.

In 2010, Shin won the AFC Champions League and a year later won the Korean FA Cup with Seongnam Ilhwa Chunma.

A year later, Shin made the biggest mark in his career with the 2-0 win against Germany, the defending champion at that time at the 2018 World Cup.

However, when facing Park's Việt Nam as Indonesia coach, Shin's team suffered a heavy defeat against his seniors with four goals conceded.

Indonesia will face Cambodia on Thursday in their opening match of the AFF Cup campaign.

Indonesia coach sees Việt Nam as the strongest opponent in Group B have 693 words, post on vietnamnews.vn at December 7, 2021. This is cached page on Talk Vietnam. If you want remove this page, please contact us.