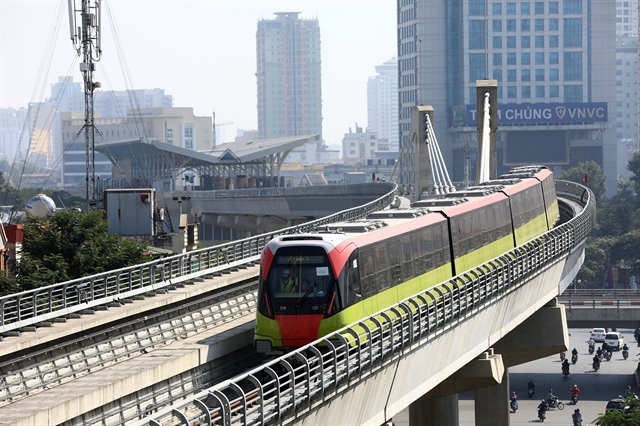 The train was put on a trial speed run on Monday. — VNA/VNS Photo

HÀ NỘI — Trains on the Nhổn-Hà Nội Train station metro lines were put on a trial run at a maximum speed of 80km per hour on Monday morning.

The speed was pushed to the maximum to check the operation quality as well as the synchronisation between the information, signals, and control systems, according to the Metropolitan Railway Management Board (MRB).

The trains departed from the S1 Station (Nhổn) and ran to S8 Station (Cầu Giấy) and returned. The distance between the two stations is 8.5 km.

The designed maximum speed of the trains is 80km per hour. But in reality, it is hard for the train to increase to that speed because the distance between two stations is around 1km, according to the MRB.

The trial run at the maximum speed is important to examine the operational quality of the trains and assess safety.

Once fully operational, eight trains will be officially in service, with one used to ease overloading at peak hours.

Each train is designed to carry between 944 and 1,124 passengers.

The trains are designed and manufactured by France’s Alstom company.

The project’s investment of about VNĐ30.1 trillion (US$1.29 billion) comes from official development assistance of the French Development Agency and loans from the French Government.

The elevated section is slated for commercial operation by the end of this year, while the remaining part which is underground will be put into use next year. — VNS

Hà Nội metro trains put on trial speed run for elevated stations have 576 words, post on vietnamnews.vn at December 6, 2021. This is cached page on Talk Vietnam. If you want remove this page, please contact us.