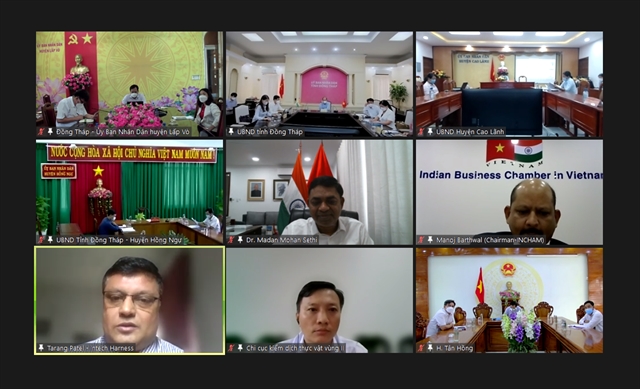 The 'Virtual meet on Trade and Investment promotion between India and Đồng Tháp Province in Agriculture' on December 15 saw Đoàn Tấn Bửu, deputy chairman of the province People's Committee, saying trade with India had grown steadily in in the first nine months of this year to reach US$5.96 million.

His province is ready to tie up with Indian investors and businesses for organic and sustainable food processing and wants to invite them to invest in farming mango, its main fruit, he said.

He wants to have more interactions between states in India and provinces in Việt Nam.

On the occasion, the Indian Business Chamber in Vietnam (INCHAM) and Đồng Tháp Trade, Tourism and Investment Promotion Centre signed an MoU to step up trade and investment co-operation between the two sides and strengthen communication and exchanges of delegations.

The meeting was attended by 70 Indian and Vietnamese officials and executives from the agricultural commodities and food processing sectors.

Đồng Tháp seeks to tap Indian investment, technology in agriculture have 453 words, post on vietnamnews.vn at December 16, 2021. This is cached page on Talk Vietnam. If you want remove this page, please contact us.