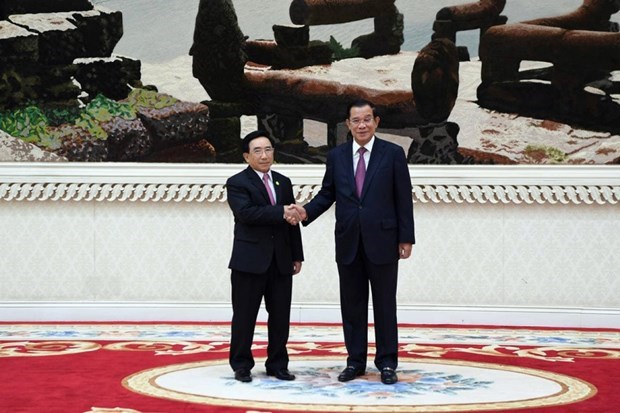 During their meeting in Phnom Penh, the two PMs spoke highly of the longstanding bilateral ties between the two countries. They agreed to draw up a master plan as a guideline for the involved sectors of their two countries in implementing the comprehensive strategic partnership which was established in 2019.

They noted that bilateral ties between the two countries have been deepened through regular meetings between their senior leaders.

Cooperation has been broadened in multiple areas, from national defence and public security, to economy, socio-cultural affairs, and efforts to curb drug trafficking, as well as cooperation between various localities of the two countries.

Concerning cooperation in tourism, the two sides suggested holding talks on ways to revitalise the tourism industry when the COVID-19 pandemic wanes.

Also at the talks, Cambodia announced to provide 13 million USD and 500,000 doses of Sinovac vaccine to support Laos 's battle against the pandemic. Of the sum, 10 million USD will be donated by private companies in Cambodia.

Cambodia, Laos foster bilateral cooperation have 406 words, post on en.vietnamplus.vn at December 1, 2021. This is cached page on Talk Vietnam. If you want remove this page, please contact us.