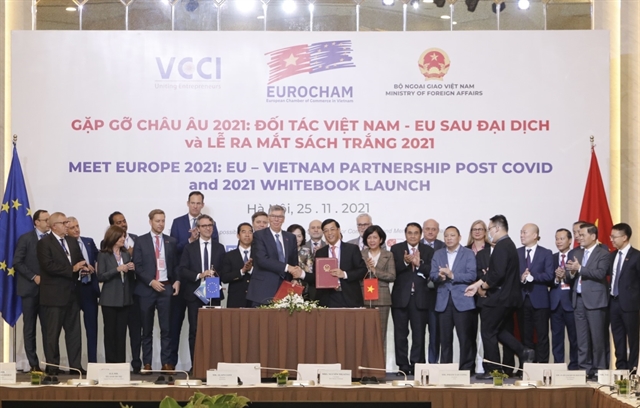 HÀ NỘI — Despite the difficulties caused by the COVID-19 pandemic, the two-way trade turnover between Việt Nam and the European Union (EU) in the first ten months continued to grow by nearly 20 per cent compared to the same period last year.

Nguyễn Thị Hồng, Governor of the State Bank of Việt Nam (SBV), spoke at a conference launching the 13th edition of the EuroCham 2021 White Paper in Hà Nội, saying: "In 2020, trade turnover [between Việt Nam and the EU] was more than US$56 billion."

Hồng said: "The EU is one of the leading partners in development cooperation, the fifth largest trading partner and the sixth largest investor of Việt Nam," adding that the EU-Việt Nam Free Trade Agreement (EVFTA), which took effect from August 1 last year, was an important milestone in economic cooperation between the two sides.

Hồng said that the Investment Protection Agreement between Việt Nam and the EU, when approved, will further deepen the efficiency of economic and investment cooperation between the two sides.

Hồng cited the recent Investment Report 2021 of the United Nations Conference on Trade and Development (UNCTAD), showing that, with FDI capital of $16 billion in 2020, for the first time, Việt Nam entered the top 20 countries attracting the most FDI in the world.

Hồng said at the launch: "The Vietnamese government is focusing on solutions to create conditions for European businesses to invest in high technology, supporting industries, smart agriculture, and energy, construction infrastructure.”

“Việt Nam wants European businesses to support Vietnamese businesses to participate more deeply in supply chains and value chains of the European region and the world."

EuroCham President Alain Cany appreciated Việt Nam's support for European businesses during the pandemic, saying: “It is important now that the two sides focus on the future of EU-Việt Nam trade and investment."

The EuroCham President said despite the pandemic, the two sides should maximise the advantage of the EVFTA, adding that Việt Nam’s exports to the European market increased 11 per cent in the first 12 months after the agreement came into effect.

He said: "It is the period for the European business community in Việt Nam to enter the recovery phase after the COVID-19 pandemic, towards a brighter and more prosperous future in trade and investment cooperation between Việt Nam and the EU."

Cany said the goal of European businesses in Việt Nam was not survival but to develop well after the pandemic. Currently, production activities are gradually returning, so businesses need to make the most of the EVFTA.

Longing for the Việt Nam-EU trade to recover quickly after the pandemic, he said: "There are huge opportunities for trade and investment between EU-Việt Nam after the pandemic, with the EVFTA ushering in the gradual reduction of tariffs and opening up of markets."

He said if the two sides can harness the full potential of the deal, through a partnership between the Government and the business community, firms and consumers on both sides will benefit.

Cany said that the publication of the White Book could be one of the tools that can help the two sides achieve the goals.

Phạm Tấn Công, chairman of the Vietnam Chamber of Commerce and Industry (VCCI), said the EU was a reliable partner of Việt Nam, and Việt Nam was a potential and safe market for EU businesses.

He added the EVFTA, which came into effect after 10 years of negotiation, has had a positive impact on trade activities. In the first ten months of the year, exports from Việt Nam to the EU reached $41 billion, up 10.8 per cent over the same period in 2020, while the investment wave of European businesses in Việt Nam also increased sharply.

With the theme “Meet Europe 2021: Relations Vietnam – EU post-pandemic,” the launch of the White Book also attracted the participation of leaders from businesses and provinces. European enterprises including Decathlon, Bosch, Temix and Sanofi also shared their important views on strategic development in Việt Nam at the event.

Also at the event, the Ministry of Foreign Affairs signed a new MoU with EuroCham to enhance the relationship.

According to EuroCham, collecting the insights and suggestions of EuroCham’s 18 Sector Committees – working groups where enterprises in similar industries advocate on common topics – the Whitebook brings together the perspectives of European business in one flagship publication. — VNS

VN-EU trade continues recovery, towards a brighter future have 1063 words, post on vietnamnews.vn at November 25, 2021. This is cached page on Talk Vietnam. If you want remove this page, please contact us.