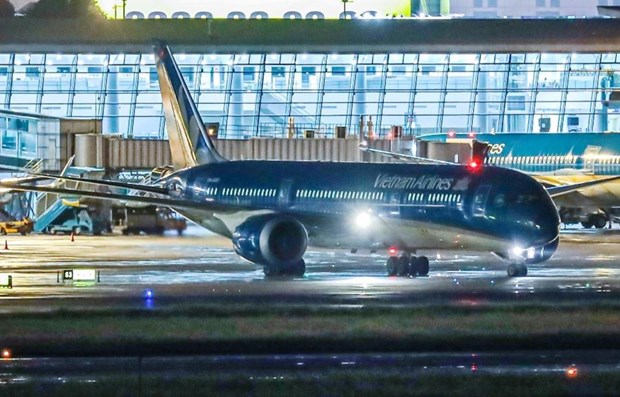 Vietnam Airlines successfully operates its first direct flight to the US. (Photo: VNA)

From November 28, Vietnam Airlines regularly operates two flights per week between Ho Chi Minh City and San Francisco. The airline plans to increase the number to seven flights per week after the COVID-19 pandemic is controlled and the Vietnamese Government allows the reopening of regular international routes.

Vietnam Airlines also considers opening more routes between Los Angeles of the US and Hanoi or HCM City. All flights between Vietnam and the US will use the most modern wide-body aircraft, such as Boeing 787 and Airbus A350.

Its direct flight to the US marked a big step forward for the firm and a historic milestone for Vietnam's aviation industry, he said.

It took the direct flight 13 hours and 45 minutes to reach the US. The flight used Boeing 787-9 Dreamliner, one of the most modern wide-body aircraft in the world manufactured by the US’s Boeing Company.

Director of San Francisco International Airport Ivar C. Satero said the event has made the airport the US's leading gateway for passengers from Vietnam to access areas in the San Francisco Bay.

Vietnam’s aviation industry and Vietnam Airlines have prepared for 20 years to open a regular air route to the US. The scheme officially completed on November 4 this year after the national flag carrier officially received a permit from the US Federal Aviation Administration (FAA) to operate non-stop commercial flight service between the two countries.

The event is hoped to contribute to promoting economic cooperation, cultural exchange and relations between Vietnam and the US.

Statistics show that the Vietnam – US aviation market counted 1.4 million passengers in 2019, growing at an average of 8 percent per year in the period 2017-2019./.

Vietnam Airlines successfully operates first direct flight to US have 524 words, post on en.vietnamplus.vn at November 29, 2021. This is cached page on Talk Vietnam. If you want remove this page, please contact us.