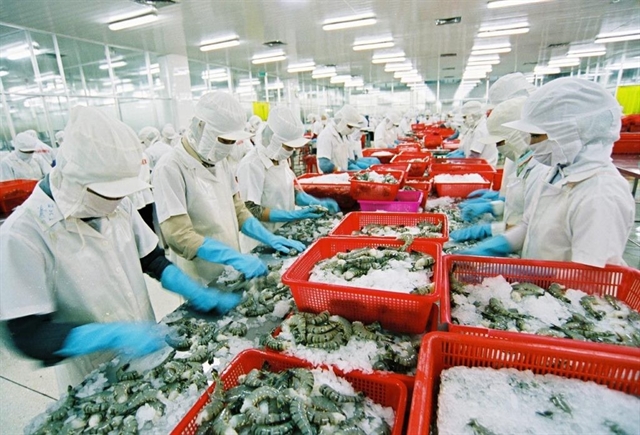 Workers process shrimp for export to Russian market in a seafood processing firm in An Giang province. Russia has become a potential market for Vietnamese exporters in recent years. — VNA/VNS Photo

According to MARD Deputy Minister Trần Thanh Nam, Việt Nam is holding the top position in trade turnover with Russia in Southeast Asia, and is Russia's sixth largest trade partner in Asia-Pacific.

The two sides should make use of their advantages and turn challenges into opportunities amid the COVID-19 pandemic, Nam said.

"Both sides need to take drastic actions to grasp opportunities during the pandemic and push for greater cooperation in agricultural trade," Nam said.

Việt Nam was a dynamic and developed market in the region, the official said, stressing the two countries would promote their agricultural trade to a new level.

Echoing Levin's views, Vietnamese Trade Counselor in Russia Dương Hoàng Minh said thanks to the EAEU, most of Việt Nam's agricultural and aquatic exports to Russia have enjoyed a zero tariff.

In addition, they should invest more in the products that have advantages like coffee, aquatic products and processed fruit, he said, explaining that raw material exports bring about low economic value.

Minh added thanks to the AEAU, where the majority of Vietnamese farm produce and seafood to Russia are subject to zero per cent import tariff, products have a greater advantage compared to those from other countries that do not have a similar trade agreement with Russia.

More importantly, Việt Nam has a large number of enterprises that have been active in the Russian market for a long period.

"A deep insight of the Russia market is essential, and should be the priority for Vietnamese companies," said Minh.

Minh also suggested local firms focus on processed food or products of higher added value, including coffee, seafood and fruits, instead of exporting raw products with a low value to the Russian market.

"The EAEU is providing local firms with an ideal platform to penetrate the market, but the Russian authorities have strict requirements on food safety and quality control," Lan said.

Lan also pointed out the complicated procedures for firms to get export licenses that are making it difficult for many companies to penetrate the market.

Meanwhile, firms subject to export limitations to Russia face a drawn-out process to address concerns from Russian authorities, Lan said, referring to the unresolved case of 10 out of 22 local catfish export companies whose sales to Russia have been suspended since 2014.

"Both sides should enhance cooperation and work out differences in the trade process to take farm trade relations to a new level," she said.

In this regard, Vice Minister Nam expected the upcoming visit of Việt Nam's State President Nguyễn Xuân Phúc to Russia would be an opportunity for both countries to strengthen economic relations.

Nam said given the combined population of 250 million, the market size is a significant incentive for companies from both countries to tap into the potential, in turn contributing to reaching the bilateral trade revenue goal of $10 billion. VNS

Việt Nam, Russia boost agricultural, aquatic trade ties have 989 words, post on vietnamnews.vn at November 25, 2021. This is cached page on Talk Vietnam. If you want remove this page, please contact us.