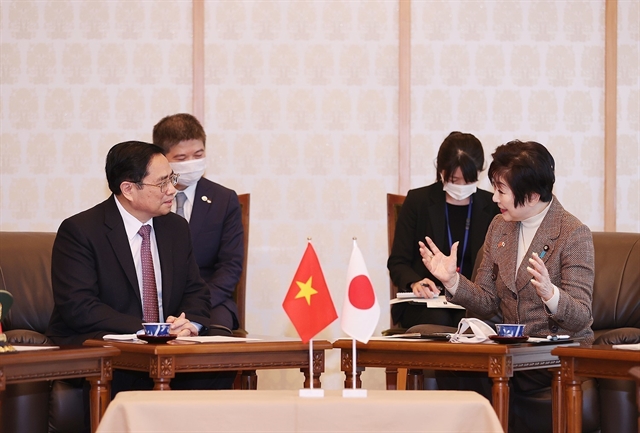 HÀ NỘI — Prime Minister Phạm Minh Chính met with the speakers of the House of Councillors and the House of Representatives of the Japanese National Diet in Tokyo on Wednesday as part of his official visit to the nation.

At a meeting with the Japanese President of the House of Councillors Santo Akiko, the Vietnamese Prime Minister announced the results of the 13th National Party Congress, orientation and development goals of Việt Nam for the coming years, and a vision to 2030 and 2045.

He affirmed that Việt Nam consistently pursues a foreign policy of independence, self-reliance, peace, friendship, cooperation and development, diversification and multilateralisation of relations; proactive and active international integration; being a friend, a reliable partner and responsible member of the international community.

The Prime Minister expressed his delight at the strong, comprehensive and substantive development of the extensive strategic partnership between Việt Nam and Japan. He once again thanked the Japanese Government for helping Việt Nam in the fight against COVID-19 and highly appreciated the contributions of the House of Councillors and President Santo Akiko to the development of the two countries’ cooperative relations.

He emphasised that Việt Nam always attaches importance to and makes every effort to implement commitments on official development assistance (ODA) projects. He suggested strengthening cooperation between the two legislative bodies and hoped the House of Councillors will support major collaboration plans between the two countries.

While applauding Việt Nam's achievements in socio-economic development and external relations in recent years and the two sides’ mutual support in fighting the COVID-19 pandemic, President Santo Akio highlighted the importance of further strengthening the extensive and comprehensive cooperation between the two countries.

She said she will support the Japanese Government to continue collaboration and help Việt Nam in socio-economic development as well as be willing to pay attention to assist the Vietnamese community in Japan.

The Prime Minister conveyed an invitation to visit Việt Nam from National Assembly Chairman Vương Đình Huệ to President of the House of Councillors Santo Akiko. 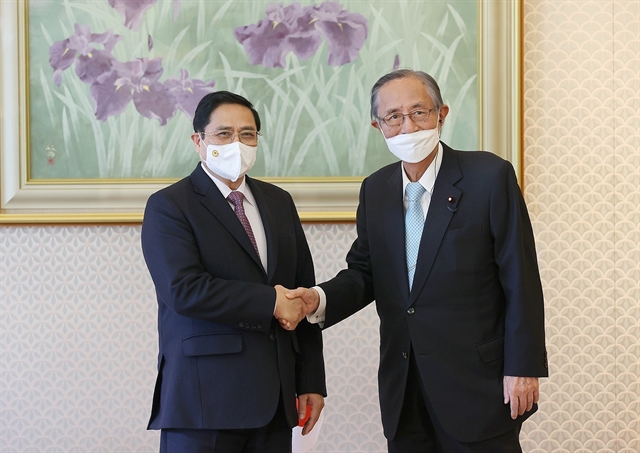 In the afternoon, Prime Minister Chinh met with Speaker of the House of Representatives Hosoda Hiroyuki, during which he informed the speaker of Việt Nam's socio-economic development.

Chính expressed his pleasure at the comprehensive development of the Việt Nam-Japan extensive strategic partnership, and offered thanks for Japan’s valuable and timely support for Việt Nam in the COVID-19 fight.

The PM affirmed that Việt Nam attaches importance to and wishes to join Japan in opening a new stage of development in the extensive strategic partnership in fields, contributing to maintaining peace, stability, cooperation and development in the region.

He suggested the House of Representatives continue to strengthen cooperation, exchange and share experience between the National Assembly committees of the two countries.

Chính said he supports the strengthening of collaboration in COVID-19 prevention and control, increase connectivity between the two economies and as well as multifaceted cooperation in the post-COVID-19 period.

The PM also extended an invitation to visit Việt Nam from NA Chairman Vương Đình Huệ to the Speaker of the House of Representatives of Japan.

PM Chính meets with leaders of Japan's Parliament have 876 words, post on vietnamnews.vn at November 25, 2021. This is cached page on Talk Vietnam. If you want remove this page, please contact us.