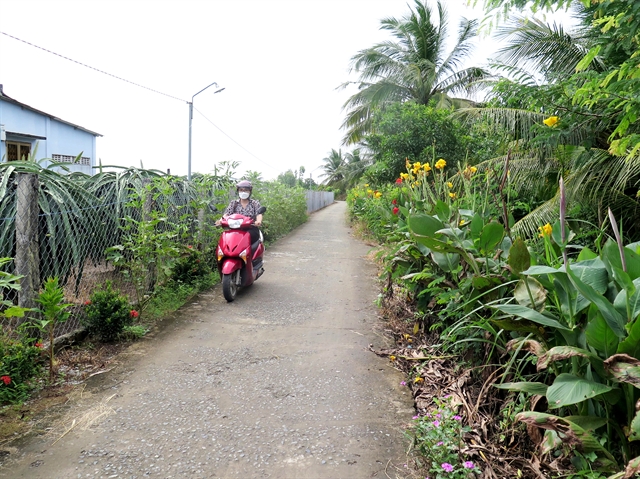 A hamlet-level road in Châu Thành District's Long Trì Commune, Long An Province, is cemented and has flowers and a lighting system. – VNA/VNS Photo Minh Hưng

LONG AN – The Cửu Long (Mekong) Delta province of Long An has been very successful in building national new-style rural areas, improving people's incomes in the countryside and the beautiful look of rural areas.

To be recognised as a new–style rural commune, a commune must meet 19 criteria related to infrastructure, irrigation, electricity, environment, income, education, healthcare, social security, and culture.

The looks of most communes have improved significantly, and infrastructure for transport and irrigation, healthcare centres, rural markets, and commune cultural houses meet the [programme] criteria, according to the province Coordination Office for New–style Rural Areas.

Nguyễn Văn Út, chairman of the province People's Committee, said building new-style rural areas would be successful only when the role of local people is promoted effectively.

For this, province authorities have propagandised the meaning and significance of the programme to make the public understand that the State only provides a part of the cost of building new-style rural areas and the rest is borne by local people.

For the programme, authorities have encouraged management, discussion and decision-making by locals.

The provincial authorities have let local people decide how their financial contributions will be used and monitor the use.

Tân Tây Commune became Thạnh Hoá District's first commune to be recognised as a new – style rural commune and its residents played an important role in it.

Nguyễn Văn Hoàng, head of the management board of the yellow Ochna growing village in Tân Tây Commune, said: "When the commune began the programme, many things were new to the people, but they approved and actively participated in the programme after local authorities provided clear explanations."

Locals earn an average of VNĐ56 million ($2,500) a year and the poverty rate is only 0.82 per cent, according to the commune People's Committee.

Long An is focusing on improving farmers' incomes and restructuring agriculture by switching to advanced techniques.

Võ Kim Thuần, head of its Irrigation and Rural Development Sub-department, said the province has identified four farming areas for the use of advanced techniques.

Local authorities and relevant agencies have helped farmers improve yields and product value by using advanced farming techniques and boosting the promotion of their produce.

Other measures such as controlling the food safety production chains, creating favourable conditions for tracing origins, and improving quality have also been undertaken.

More and more communes have become prosperous through the new – style rural programme, according to local authorities.

For instance, Long Trì Commune in Châu Thành District has more than 2,160 households mostly living off dragon fruit and other crops and livestock.

Under the programme, it has created concentrated dragon fruit farming areas where advanced techniques are used.

The fruit is grown on 690ha, with 400ha planted to Vietnamese good agricultural practices (VietGAP) standards.

All commune–level roads in Long Trì are cemented and 3.5 – 6 metres wide, and all hamlet roads are also asphalted. Flowers are grown along roads.

Nguyễn Văn Vĩnh, who grows dragon fruit using advanced techniques in Long Trì, said: "The building of new-style rural areas makes villages more beautiful, people have better lives and the work of farming is less hard thanks to the application of advanced techniques."

With a smartphone and sensors for monitoring soil moisture and nutrition in his orchard, he can know what it needs and irrigate it remotely, he said.

It expects to have an additional four each by year-end.

In 2021 – 25 it plans to have 10 districts, towns and cities, or two-thirds of all, becoming the former, and two districts becoming the latter.

Nguyễn Minh Lâm, deputy chairman of the People's Committee, said the province would boost advocacy and develop effective and creative models for the programme.

It would focus on building necessary infrastructure, he said.

It would prioritise the development of agriculture through value chains, especially safe and clean production, and boost the use of advanced techniques, he said.

It would protect the environment and build rural areas that are green, clean, beautiful, and modern while also preserving their traditions and culture, he added. – VNS

Long An Province fully embraces new-style rural areas programme have 1187 words, post on vietnamnews.vn at November 25, 2021. This is cached page on Talk Vietnam. If you want remove this page, please contact us.