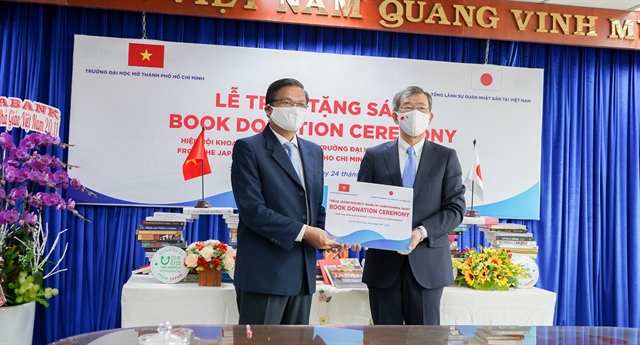 HCM City Open University receives English books about Japan from the non-profit Nippon Foundation and the Japan Science Society on Wednesday as part of their Read Japan Project. — Photo courtesy of the university

HCM CITY — The non-profit Nippon Foundation and the Japan Science Society on Wednesday donated English books about Japan to HCM City Open University's library as a part of their Read Japan Project.

The goal of the READ JAPAN PROJECT is to use outstanding books to provide readers around the world with an accurate picture of Japan.

The Nippon Foundation hopes to reach out to young researchers who are interested in Japan, as well as opinion leaders and intellectuals specializing in areas other than Japanese studies.

The foundation says that it has been making significant efforts promoting the understanding of Japan to overseas countries and working closely with different governmental bodies over the years.

However, further information and data about Japan are still needed and will be provided to opinion leaders and intellectuals in foreign countries. — VNS

HCM City university receives English books about Japan as part of Read Japan Project have 235 words, post on vietnamnews.vn at November 25, 2021. This is cached page on Talk Vietnam. If you want remove this page, please contact us.