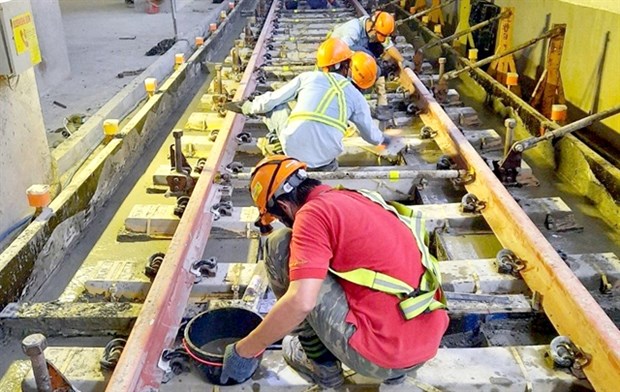 HCM City (VNS/VNA) – Two final underground railway segments for Metro Line No 1 in Ho Chi Minh City are being installed and will be completed in two months.

The two segments are 660m long and 1.43m wide, and run parallel to each other between the Opera House and Ben Thanh rail stations.

Around 56 engineers and construction workers assigned to do the work are fully vaccinated and strictly adhere to COVID-19 regulations.

The Metro Line No 1's underground railway system is 2.6km long, with three stations in the city centre. Facilities such as lobbies and ticket machines for the Ba Son and Opera House stations have been completed.

Work on Ben Thanh Station is slated to be completed by the end of the year. Ben Thanh, Metro Line No 1 's central station, will connect to three other metro lines in the future.

Around 88 percent of the work for the metro line had been completed as of November 10. The line was originally expected to be finished by the end of the year, but the COVID-19 pandemic has greatly affected construction work and imports.

The metro line is now expected to be completed by the end of 2023 or early 2024, according to MAUR .

The 43.757 trillion VND (1.9 billion USD) route, from Ben Thanh Market in District 1 to Suoi Tien Theme Park in District 9, is 19.7km long and will have 14 stations, three of them underground.

The metro has been built with official development assistance (ODA) and funds from the Japan International Cooperation Agency.

Of the total 17 imported trains from Japan, seven have been received.

The metro line is the first of eight metro lines to be built in the city.

On November 6, Hanoi's first metro line opened for service, from Cat Linh in Ba Dinh district to Ha Dong district. Many locals said they preferred to use the metro line over their personal vehicles because of affordability and less traffic congestion and noise pollution./.

Final underground track segments on HCM City’s Metro No 1 to be completed in two months have 552 words, post on en.vietnamplus.vn at November 12, 2021. This is cached page on Talk Vietnam. If you want remove this page, please contact us.