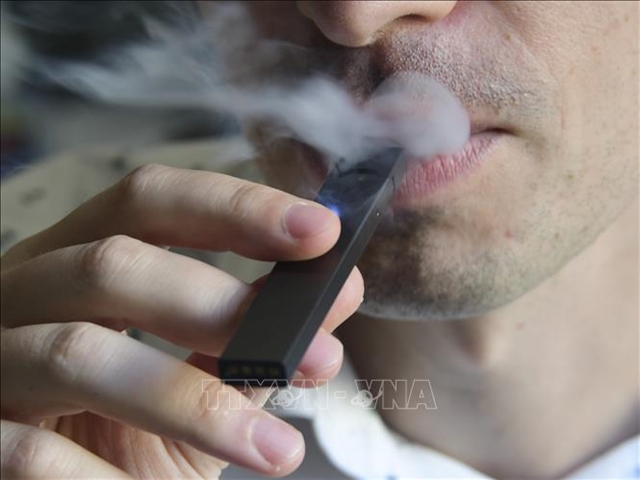 HÀ NỘI — A 15-year-old boy from Hà Nội's Thạch Thất District was taken to Saint Paul Hospital early this month, after falling into a vaping-induced coma. He is one of the many young people in Việt Nam who have taken up the habit.

He said that he inhaled e-cigarettes filled with oil he bought from an unknown seller.

According to doctors from the hospital, there has been a marked rise in admissions from patients suffering from poisoning caused by e-cigarettes.

The Director of the Poison Control Center at Bạch Mai Hospital, Nguyễn Trung Nguyên, said that the centre has seen an increase in patients admitted with illnesses relating to the use of e-cigarettes.

The centre recently treated some students from the northern province of Yên Bái. According to their families, they were offered e-cigarettes with very strange flavours, free of charge.

After using the products, the children showed signs of intoxication, such as mental abnormalities. Their hands would jitter until they were exhausted and fell asleep. Test results showed that the e-cigarettes contained narcotic drugs.

Nguyên said many new drugs are hidden in e-cigarette oils.

"The toxicity of these drugs is very complicated and can be extremely harmful to the nervous, mental, cardiovascular and whole-body systems. They can cause acute or even severe poisoning which can lead to death," he said. Long-term use exasperates the user’s risk of severe mental and brain disorders.

Phan Thu Phương, Director of Respiratory Center at Bạch Mai Hospital said that some types of addictive substances were put into e-cigarettes to create excitement.

Long-term use of nicotine products, including e-cigarettes, can lead to addiction, she said, adding that studies showed that people can be addicted to vaping. She also said vaping can pose a 15 times greater risk of cancer than traditional cigarettes.

Nguyễn Huy Quang, Director of the Legal Department under the Ministry of Health, said that many companies advertise e-cigarettes to help quit smoking, but this approach is misguided, Quang said.

"It is not possible to replace one addiction with another. The prevention of the harmful effects of tobacco is a long fight between public health benefits and tobacco manufacturing companies," he said.

According to Quang, the ministry's survey results in 2015 showed that the smoking rate among women in Việt Nam was 1.1 per cent and in men 45.3 per cent.

However, a recent study by the Institute of Health Strategy and Policy 2020 in Hà Nội showed that among students in grades 8-12, the rate of e-cigarette consumption in girls is 4.8 per cent. Among boys, it is 12.4 per cent.

This increase in numbers is a cause for concern, especially given how easily accessible e-cigarettes are for young people.

As it stands, e-cigarettes and heated cigarettes are not allowed to be produced or sold in Việt Nam. The country should not license the import and circulation of e-cigarettes, he said.

However, people can easily find and buy vape products on social networking sites. In some cases, vape products are disguised in the form of ballpoint pens, USB sticks or lipstick. Flavours include strawberry, orange, mango, melon, watermelon and milk tea. Some can be obtained for as little as VNĐ120,000.

Lawyer Lại Ngọc Thanh from the Hà Nội Bar Association said that under the Law on Prevention and Control of Tobacco Harms 2012, acts of tobacco advertising in any form are banned.

In addition, the law also prohibits the sale and supply of cigarettes to people under 18 years old. Violators could face a fine of up to VNĐ4 million.

According to WHO expert Nguyễn Tuấn Lâm, almost all vape products contain poisonous substances such as nicotine, metal and formaldehyde. "As for adolescents, nicotine numbs the senses and causes loss of control, poor concentration and impaired memory."

Lâm said young people who have tried vaping are 3.5 times more likely to begin using traditional cigarettes than those who do not.

There are more than 15,000 vape flavours available, and not all of their ingredients are commonly known.

"Vaping is harmful to both users and surrounding people, in addition to a risk of serious injury due to battery explosion."

A WHO student health survey conducted in 21 cities and provinces of Việt Nam in 2019 revealed that the rate of vaping among students aged 13-17 was at 2.6 per cent of the total, about 20 times higher than previous years. — VNS

Worrying rise in number of young people vaping in Việt Nam have 1019 words, post on vietnamnews.vn at October 18, 2021. This is cached page on Talk Vietnam. If you want remove this page, please contact us.