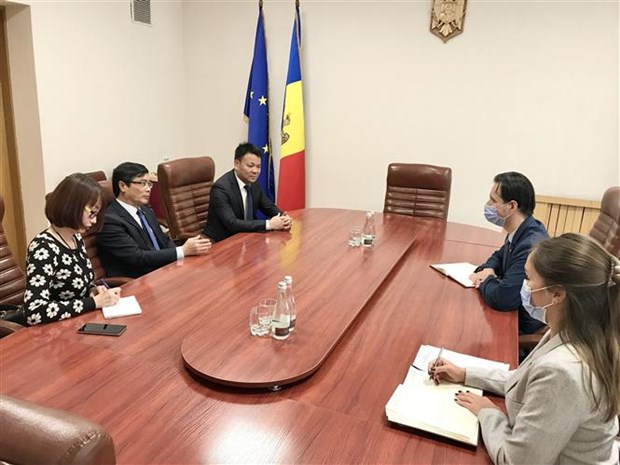 At a working session held on October 15, Minister of Economy and Infrastructure of Moldova Sergiu Gaibu briefed Thach on Moldova's strengths in economic cooperation and investment, expressing his hope that Vietnamese firms will explore and bolster investment in the European nation.

The ambassdor pointed out that although Vietnam and Moldova have nurtured a long-standing friendship, economic cooperation remains modest compared to their potential. Therefore, he vowed to prioritise bilateral economic-trade cooperation during his term.

On the same day, the Vietnamese diplomat worked with leaders of the Chamber of Commerce and Industry of Moldova on measures to promote partnership between firms of the two countries and cooperation chances.

Moldovan firms showed their interest in Vietnam's aquatic products and garment-textile, and wished to export its staples like wine and components of hydropower plants.

The Moldovan side expressed a hope that the countries will foster cooperation activities after a halt triggered by COVID-19.

The two sides agreed to hold the next meeting of the Vietnam-Moldova Inter-Governmental Committee on Economic-Trade and Scientific-Technological Cooperation as soon as possible, extend the educational cooperation agreement, and bolster collaboration in the International Organisation of La Francophonie.

The ambassador thanked Moldova for supporting Vietnamese candidates to run for positions at United Nations agencies, and underscored the important role of the Ministry of Foreign Affairs and European Integration of Moldova in promoting the multifaceted cooperation between the countries.

He asked the sides to bolster the implementation of signed projects, paving the way for cooperation expansion and negotiations for a free trade agreement ./.

Vietnamese Ambassador joins activities in Moldova have 406 words, post on en.vietnamplus.vn at October 17, 2021. This is cached page on Talk Vietnam. If you want remove this page, please contact us.