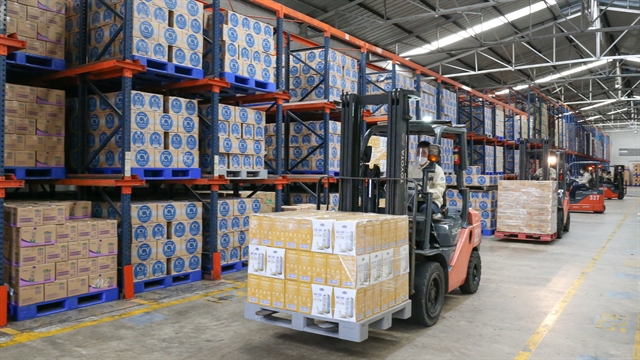 Inside a Vinamilk factory. — Photo vietnamplus.vn

HÀ NỘI — The Vietnam Report and online newspaper VietNamNet have just announced the Profit 500 list, featuring the top 500 most profitable enterprises in Việt Nam this year.

During the 2017-21 period, the three sectors of property development and construction, finance, and food and beverages, had the largest number of companies in the rankings, said General Director of the Vietnam Report JSC Vũ Đăng Vinh.

The compound annual growth rate (CAGR) of all companies in the Profit 500 list this year averaged 10.12 per cent.

Statistics also indicate that 53.1 per cent of 339 publicly traded companies maintain their growth momentum during 2019-20 and the first half of this year.

Meanwhile, 24.4 per cent of firms have shown signs of recovery in the first half of 2021.

Due to difficulties caused by COVID-19, the return on asset (ROA) of foreign enterprises inched down by 0.1 per cent from 2020 to 12.4 per cent this year, while that of the private economic sector saw a year-on-year decline of 0.4 per cent to 9.4 per cent.

ROA of public firms fell to 8.4 per cent from 11.7 per cent recorded in the previous year. — VNS

Việt Nam’s 500 most profitable enterprises in 2021 announced have 448 words, post on vietnamnews.vn at October 19, 2021. This is cached page on Talk Vietnam. If you want remove this page, please contact us.