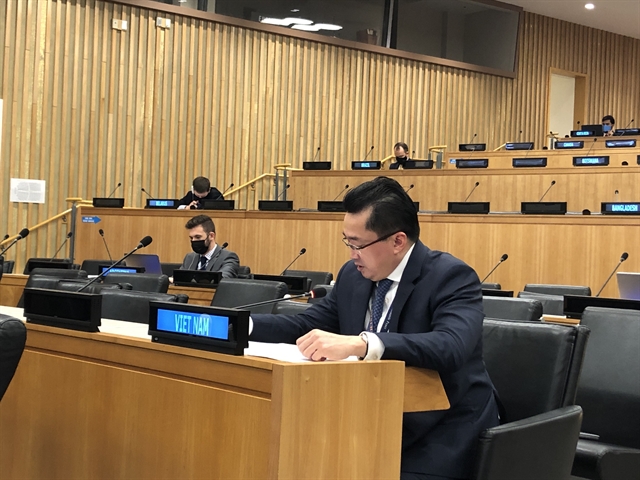 HÀ NỘI — Việt Nam has called on the United Nations and other countries to pay greater attention to ensuring security and safety for UN peacekeeping forces, strengthening the application of information technology in operations, and defining tasks and resources for missions.

Addressing a general debate of the Special Political and Decolonisation Committee (Fourth Committee) on Monday (US time), Ambassador Phạm Hải Anh, Deputy Permanent Representative of Việt Nam to the UN, underlined that peacekeeping operations were one of the important tools of the UN in maintaining peace and international security.

Mentioning Việt Nam's contributions to UN missions in Central Africa and South Sudan recently, he said that the ratio of Vietnamese female peacekeepers in the missions now stood at 20.6 per cent, compared to the rate of 16.5 per cent last year and much higher than the UN target by 2028.

He affirmed that Việt Nam would continue to actively and intensively engage in UN peacekeeping operations.

The Vietnamese representative underlined the significance of the decolonisation process and respect for the right to self-determination of peoples of colonial countries in line with the Declaration on the Granting of Independence to Colonial Countries and Peoples in 1960, the UN Charter and relevant resolutions.

He expressed his concern about the situation of Palestinian refugees in the Gaza Strip and occupied Palestinian territories, affirming that Việt Nam supports the self-determination right and the just struggle of Palestinian people for this right, as well as the two-state solution with the formation of the Palestinian State having Jerusalem as the capital city and the peaceful existence with Israel.

The Vietnamese diplomat also called on stakeholders to create favourable conditions for humanitarian activities and response to the call from the UN Secretary General to strengthen contributions to activities of the United Nations Relief and Works Agency for Palestine Refugees in the Near East (UNRWA).

Regarding the bomb and mine issue, Ambassador Hải Anh said that bombs, mines and unexploded ordnance left by war had continued to be a threat to civilians in 60 countries and territories, including Việt Nam. He thanked the UN, international organisations, countries and non-governmental organisations for their efforts in minimising risks and dealing with bomb and mine consequences.

He shared Việt Nam's experience in implementing national-level solutions and called for countries’ cooperation to settle challenges in the process of bomb and mine clearance.

The Vietnamese Ambassador also affirmed Việt Nam's stance of supporting international efforts in promoting the peaceful use of outer space, and called on countries to exercise restraint to avoid an armed space race. He also expressed Việt Nam's hope to strengthen cooperation with the international community in space science and technology, ensuring security and safety of outer space to serve the sustainable development of all people.

The Fourth Committee considers a broad range of issues covering a cluster of five decolonisation-related agenda items, the effects of atomic radiation, questions relating to information, a comprehensive review of the question of peacekeeping operations as well as a review of special political missions, the UNRWA, Israeli Practices and settlement activities affecting the rights of the Palestinian people and other Arabs of the occupied territories, and International cooperation in the peaceful use of outer space. In addition to these annual items, the Committee also considers the items on Assistance in mine action, and University for peace biennially and triennially respectively, both of which will be before it at the 76th session of the General Assembly.

Việt Nam highlights significance of UN peacekeeping at Fourth Committee’s debate have 708 words, post on vietnamnews.vn at October 26, 2021. This is cached page on Talk Vietnam. If you want remove this page, please contact us.