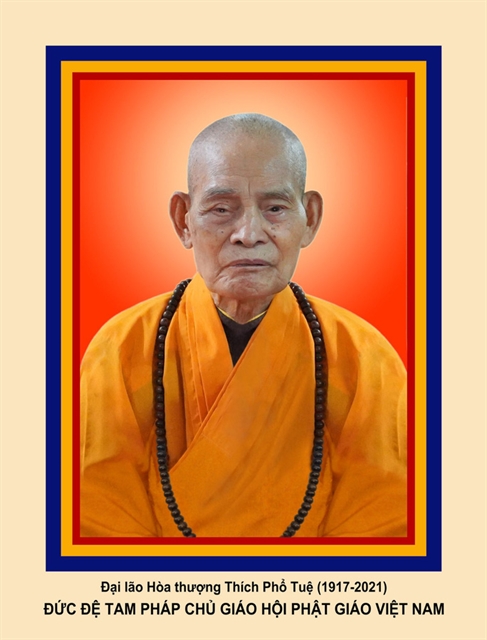 HÀ NỘI — The Most Venerable Thích Phổ Tuệ, Supreme Patriarch of the Patronage Council of the Việt Nam Buddhist Sangha (VBS), passed away on Thursday morning at the age of 105.

The Most Venerable, who led an 85-year religious life, was also a member of the Việt Nam Fatherland Front Central Committee and head of the Viên Minh (Ráng) Pagoda in Quảng Lãng commune in Phú Xuyên district, Hà Nội.

He used to be the Vice President of the VBS's Executive Council and Head of the executive board of the VBS chapter in the former Hà Tây Province (now part of Hà Nội).

The monk was honoured with the Hồ Chí Minh Order, the second-class Independence Order, the Great National Unity Order, the Certificate of Merit by the Prime Minister and many other noble rewards, in recognition of his dedications to the Buddhism and the secular life.

A respect-paying ceremony will be held at Viên Minh Pagoda from 7am on Friday through Saturday. The memorial service will be at 9am on Sunday. — VNS

Supreme Patriarch of Việt Nam Buddhist Sangha passes away have 228 words, post on vietnamnews.vn at October 21, 2021. This is cached page on Talk Vietnam. If you want remove this page, please contact us.