There are many ways to cook hemibagrus, a type of catfish found in the Serepok River in the Central Highlands province of Đắk Lắk.

But grilling or making a hotpot, is thought to be the most tasty by far.

First though, they need to be caught, and in Buôn Đôn District's Ea Bar Village, village elder Y-Amiradap said this is no easy feat as this kind of fish live in parts of the river that has many rapids.

And the number of fish is dwindling, partly due to climate change. In days gone by, fish were plentiful in the river, some as big as a calf.

But although there were many, catching them was difficult. Hunters would use harpoons and attempt to spear the fish as they swam past their boats.

Y-Amiradap said: "Sometimes we saw a lot of big hemibagrus swimming but hunters have to be patient and wait for them until they swim near their boat then throw the long harpoon at the fish.

"After that we have to wait for half an hour or more, until the fish becomes weaker and weaker and begins floating on the water. We used string to pull it in to our boat." 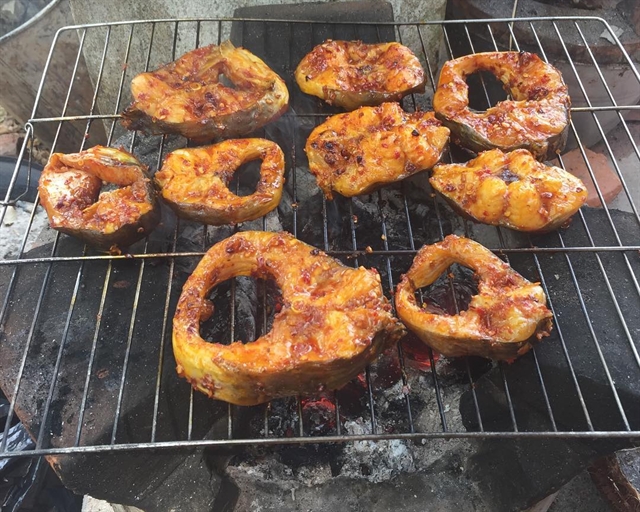 The hemibagrus pieces should be grilled over wooden charcoal to ensure its natural taste. Photo phongnhaexplorer.com

Today, harpoons have been replaced with fishing rods, and although sparse, when caught they provide a delicious meal.

After cleaning the fish, it is cut it into pieces and wrapped it in a special kind of forest leaf before grilled over wooden charcoal.

"I often travel to Buôn Đôn just to enjoy dishes cooked from hemibagrus which locals catch in the Serepok River," he said. 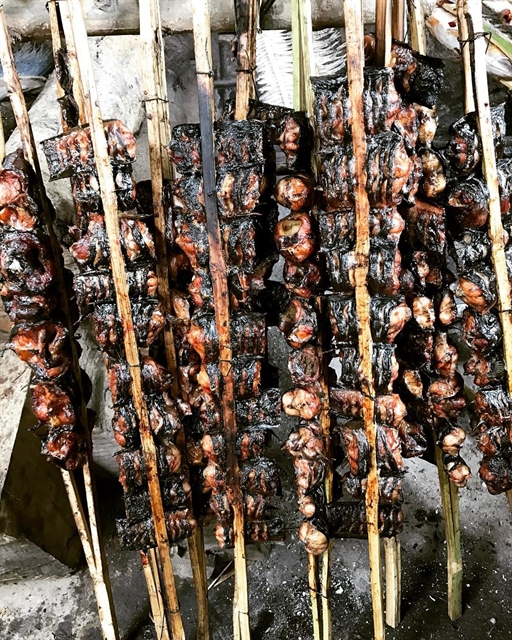 Another way of grilling hemibagrus by locals along the Serepok River. Photo phongnhaexplorer.com

Chu said his mouth waters when he sees the fish being prepared on the grill, fragrant smells wafting in the air as he waits for his meal.

Finally when the dish arrives, served with bananas, fresh herbs, star fruit, pineapple and a little vermicelli, plus a bowl of dipping sauce made with garlic, lemon, sugar and chili, he feels like he is in food heaven.

"It is an ideal food to eat with a glass of wine," Chu said.

Another way to cook up a treat with this type of fish, is to make a hotpot, a speciality in Đắk  Lắk and also Tây Nguyên.

Local Vương Thị Thái of Buôn Ma Thuột City said it’s the perfect food to warm you up on a chilly day.

But she said to create a true hotpot, needs top skills such as how to soak and prepare the fish so it does not lose its special characteristics. 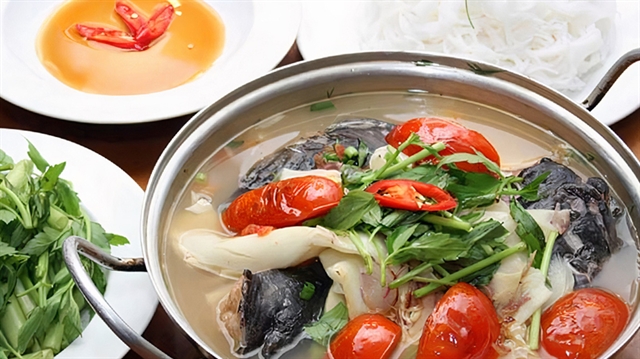 The fish pieces should be marinated with galangal juice, fermented rice, minced turmeric, fish sauce and shrimp paste for at least half an hour, said Thái, who insists not to waste the bones and head as they are needed to make the broth.

When the broth is boiled, put the soaked fish pieces in the pot together with fresh vegetables such as celery, banana flowers, broccoli, peppermint and bitter forest veg and wait for a while before tucking in.

Vũ Thị Quang, from Hà Nội often travels to Đắk Lắc for her business. She says she enjoys the dish so much for its buttery fat and meaty texture mixed with rich broth, lightly soured pineapple, tomatos and fresh onion and fennel.

"Apart from being very tasty, the dish is a good way to connect with my business friends and partners," Quang said.

"Dishes created from hemibagrus by locals showcase their cooking skills and brings a taste of the Tây Nguyên wild jungle to eaters, particularly, those from big city like me," she said.

"I felt as if my heart is melting when eating this dish," Quang said. VNS

Story of hemibagrus caught in the wild Serepok River have 1103 words, post on vietnamnews.vn at October 19, 2021. This is cached page on Talk Vietnam. If you want remove this page, please contact us.