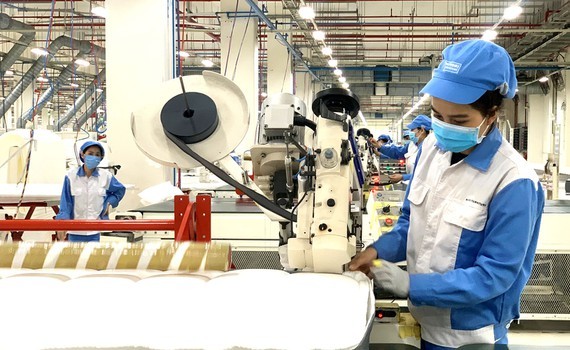 As of now, Binh Duong Province has 3,330 businesses with 331,585 workers having resumed their operation. The province has also carried out measures to maintain enterprises' production to prevent supply chain disruption.
Ba Ria-Vung Tau Province saw 33 businesses with nearly 15,000 workers reopened, raising the total number of companies operating in industrial zones to more than 300. The industrial production value of the province reached VND228 trillion in the first nine months, presenting a year-on-year increase of 4 percent.
In Binh Phuoc Province, 42,540 workers of 166 enterprises in industrial parks returned to work and more than 3,000 businesses located outside industrial zones with over 56,000 laborer resumed operation. Nearly 100 companies currently plan to recruit up to 9,200 employees.
At present, about 400 businesses with 41,306 workers have implemented ” three on the spot ” work arrangement to ensure social distancing and safe production in Dong Nai Province. 1,582 among 1,713 companies with 497,050 employees are operating while 131 others with 118,308 laborers have temporarily suspended their operation.
At the end of September, the People's Committee of Tay Ninh Province has issued a production recovery plan. Thereupon, 185 local and foreign enterprises in industrial and economic zones have registered to reopen with about 56,000 workers.
The fourth wave of Covid-19 pandemic in the country from late April was longer and left much negative impacts on businesses, such as the cost of implementing the “three on the spot” model, bank interest rates on loans, salary payment, price increases for raw materials, difficulties in reaching preferential policies of capital and human resource. In addition, businesses take a cautious approach on reopening because of the vaccination rate of some localities that has only reached 20 percent.
Many companies suggested provinces boost immunization rate and create favorable conditions in travelling in an online forum on solving problems of businesses affected by Covid-19 that was held in the beginning of October by Ba Ria-Vung Tau Province.
A lot of commercial banks in the province have cut lending rates for enterprises affected by the pandemic and offered new loans to support hard-hit businesses.
Chairman of the People's Committee of Ba Ria-Vung Tau Province Nguyen Van Tho said that the province has pledged to solve difficulties to help businesses maintain and resume production in the new normal state.

Southeastern provinces carry out gradual resumption of production have 572 words, post on m.sggpnews.org.vn at October 26, 2021. This is cached page on Talk Vietnam. If you want remove this page, please contact us.